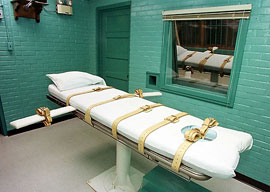 Apart from pulp novels, airport bookshops often have an eccentric selection of books. A few years ago, for example, in the bookshop in the airport nearest my English home, I found a volume devoted to the last meals requested by men about to be executed in Texas. I suppose this was to persuade passengers that there were worse meals in life than those offered by the airlines.

To my lasting regret I did not buy the book and have not found it since. It was both horrifying and fascinating. I am ashamed to say that what really horrified me were not the crimes of the condemned men but their choices of a last meal: If I remember right, they all wanted to go out on a full stomach of junk food and industrially produced sweet drinks. Whether the Texas Department of Corrections would have stood for more sophisticated tastes I don”t know: Belon oysters, for example, and a glass of fine Chablis. Would inability to find the delicacies demanded by a condemned epicure have been grounds for a stay of execution? I rather doubt it; but since most of the condemned men were executed a decade or more after they committed their crimes, it would have been no more frivolous a reason for granting a stay than many that must have succeeded. Fortunately, most of the executed men were not of the Belon-and-Chablis-consuming class.

“The decisive argument against the death penalty is that mistakes are made even in the most scrupulous and careful of jurisdictions.”

My horror at their choices was not quite as frivolous as might at first appear, for junk food is criminogenic. Sometime later, I happened to read in a medical journal the results of an experiment conducted at a prison for adolescent criminals in England. It was a double-blind trial of dietary vitamin supplementation. Half the young tykes received vitamins, the others placebo, identical in appearance. Those who received vitamins were subsequently much better behaved than those who received placebo”less violent and with fewer infractions of the rules. When those who received placebo were given vitamins and those who were given vitamins placebo, their behaviors changed in the reverse direction.

This suggested that the young criminals were chronically malnourished, notwithstanding their strength and healthy appearance. And the reason for their malnutrition could only be their diet, almost certainly composed of the kind of junk food chosen by the condemned men of Texas. A taste for junk food established in childhood lasts, apparently, up until the very moment of death. Thus one of the causes of crime is the laziness, stupidity, and incompetence of mothers, particularly in Anglo-Saxon society’s lower reaches. (The same goes for obesity.) I use the term “Anglo-Saxon” not in its racial, but in its political sense.

These memories and reflections were stimulated by the announcement that a man called Herbert Smulls had been executed by lethal injection in Missouri 22 years after having committed his terrible crime. He duly had the last meal of his choice and though the announcement did not say what it was, Mr. Smulls looked more like a man who went in for quantity rather than for quality. There was a link, however, to the story of the execution in Oklahoma of a man called Michael Lee Wilson, who was executed after a meal of “stuffed crust pizza and cherry Dr Pepper.” This execution, also by lethal injection, became famous, or infamous, because the condemned man’s last words after the injection were “I feel my whole body burning,” which has been taken by some, especially trial lawyers, to indicate that lethal injection is a cruel and unusual punishment of the type outlawed by the United States Constitution. Now if a few seconds of a burning sensation unaccompanied by any sign of physical distress can be counted cruel and unusual, it seems to me that practically all punishments must be regarded as cruel and unusual; nevertheless I am against the death penalty, despite the fact that I recently found strong evidence that, at least in England, it was effective in deterring murder.