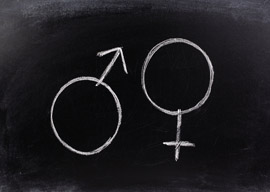 Yesterday I stopped by a Methodist church that was having a charity Christmas-tree sale. A man told me the sale was over for the day and then wished me “Happy Holidays.”

Yes, this is the season in which we must spare the sensitivities of Jews”and now Hindus and Buddhists and atheists, I suppose”by downgrading Christmas to just another “holiday.” Even people who sell Christmas trees at churches don”t dare utter the offensive word.

Christmas has not been completely rubbed out, though. Surely the preacher, from the safety of his altar, will bring himself to wish the congregation a Merry Christmas. Greater damage to the language has been done by everything having to do with “gender.”

First, let’s get one thing straight: We humans don”t have a gender; we have a sex”until recently, just one each. Gender is a grammatical term used in languages such as French and Spanish to describe the differences between such things as masculine and feminine nouns, and adjectives that agree with them. Examples are la grande fille and le grand garÃ§on. English has gender in such words as waiter/waitress and actor/actress.

In the past, writers occasionally used “gender” instead of “sex,” as in this 1723 letter written by Lady Mary Montagu:

To say truth, I have never had any great esteem for the fair sex, and my only consolation for being of that gender has been the assurance it gave me of never being married to any one among them.

It wasn”t until the 1960s that feminists cranked up the word “gender” as a replacement for sex, but D. H. Lawrence unwittingly pushed things in that direction back in 1929. He was the first to use the word “sex” as a euphemism for coitus rather than to mean what distinguishes men from women. The expression “to have sex” is an absurd construction when you think about what the word “sex” really means, but it is now ubiquitous. It’s also completely unnecessary. English has plenty of polite words for the act”coitus, copulation, intercourse, rutting, congress”and even situational refinements such as adultery and fornication. The impolite variants are endless.

Thanks to D. H. Lawrence, even movies or books can now “have a lot of sex” in them, when before his time they would have been lewd, lascivious, or lubricious. The point is that once sex ceased to be merely a clinical distinction and also began to mean copulation, the feminists had an opening and offered “gender” as a replacement. But they wanted to do a lot more than that.

Feminists were willing to keep “sex” as a mere biological detail, but “gender” was much more important. It meant all the oppressive freight society loaded onto women which kept them from their natural roles as mathematicians and physicists and made them want to have children. Now we have grotesque expressions such as “gender equality,” “gender-neutral,” and “gender-inclusive.”

“Gender” was meant to work the way “race as a social construct” works. Race, the lefties tell us, is a sociological optical illusion that has nothing to do with biology. We may think there are racial differences, but it’s all in our minds. That’s exactly what feminists wanted us to think about sex. “Gender” means “sex as a social construct.” It’s only brutish custom, not biology, that makes men into soldiers and women into nurses.