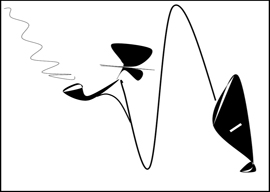 “I lighted a cigarette, and gave myself up to meditation.” Thus runs the most expressive quote from the entire canon of P.G. Wodehouse, who wisely leaves the actual content of Bertie Wooster’s meditations to our imaginations. I was reminded of the metaphysical aspects of smoking when the manager of my favorite cigar dealer—Sautter’s on London’s Mount Street—described a certain petit corona with a shrug and the simple words: “It’s a moment of reflection.” And yet the same reflective qualities can be found in a humble cigarette—as this timely deposition from The American Conservative neatly elucidates.

Smoking is a physical pleasure that reminds us that life is not merely a physical affair. It is a debit against the health of the body that credits to the health of the mind. As such, in its own small way, it is a reminder of the afterlife. It is also part of a civilized terrestrial life, and European life in particular. This makes it—along with humor, culture, and all the other hard-to-control aspects of our magnificent race—an irresistible target of the left. Being an indefatigable servant of human freedom, I smoke progressively more as various governments clamp down on it. Over a long lunch before Christmas my pal concluded that I just like “vice signaling.”

“Being an indefatigable servant of human freedom, I smoke progressively more as various governments clamp down on it.”

But who doesn’t love sinking their teeth into the reddest of all forbidden fruits: the indoor cigarette? The Austrians—whose mendacity has been honed passing the buck for two World Wars—have some type of loophole that allows this in the cafés of Vienna. In ever-pragmatic Amsterdam, smokers can simply chuck a Euro into the kitty used to pay the eventual municipal fine. Japan is still pleasingly libertarian and reactionary in the matter of smoking. Other countries are not so lucky. The miasma of civilization laid across the atavistic soul of South Africa is so thick that you now cannot smoke even outside the Brass Bell (a seaside pub on the Cape peninsular where my maternal grandfather drank and died; a tradition half of which I intend to keep up). With the pathological self-regard common to all socialists, many countries have even banned a harmless—and pointless—activity known as “vaping.”

Of course, the inquisitors of the modern state have other irons at their disposal than mere smoking bans. Health warnings on European packets show puckered sphincters punched, Hieronymus Bosch-like, into unsuspecting human necks. Well, that’s what the Brits get anyway. The more sensitive inhabitants of Italy—my home berth these last years—are treated to the sculpted flanks of a naked man suffering from tobacco grower’s droop (I have no firsthand evidence of such a thing ever actually occurring). These warnings should in theory be rotated through the different jurisdictions. Something tells me that the ever-biddable and sclerotic E.U. might not get around to imposing such an ugly dose of reality on delicate Latin constitutions of the bel paese.

The chief pile driver used by governments to punch down on smokers is, of course, taxation. With a hypocrisy as unapologetic as an Argentine stallion unfurling himself across the Pampas, governments pad their buttocks with hundreds of millions of revenue from an activity that they claim to decry. It matters not that this is the ultimate regressive tax, given that no self-respecting gentleman ever buys cigarettes in a high-tax jurisdiction. Locally bought cigarettes indicate one is too static or poorly connected to access cheaper and more attractive alternatives. Here we find a distant echo of Albania following the collapse of Communism, where anti-Western paranoia remained so high that local counterfeit cigarettes were more sought-after than the real imports.

Here too we come to the main point of my little discourse: that in their greed and venality, Western governments catalyze an immense trade in smuggled cigarettes. We’ve all heard stories in bars—in South Armagh or Bratislava or Casablanca—about how such smuggling funds terrorism. One of the Irish border’s most successful smugglers-cum-nationalists—or the other way round, depending on taste—was the expressively named Slab Murphy, whose house conveniently abutted the border. I’m given to understand that the Mohammedan terrorist who directed the assault on the Tigantourine gas plant in Algeria—which cost 39 innocent lives—counted among his sobriquets “Mr. Marlboro” on account of his funding methods. Without the massive international gradients in cigarette taxation, the magazines of his AK-47s would have been empty. The symbiosis between taxation and crime is also present in the dear old United States. Highways 81 and 95 are together known as Corridor A, along which tobacco is moved from the lower-tax states in the South toward lefty New York—where it is estimated that over half of all cigarettes consumed are now contraband.