US Policy: Cheer Ukrainians On — and Keep Us Out! 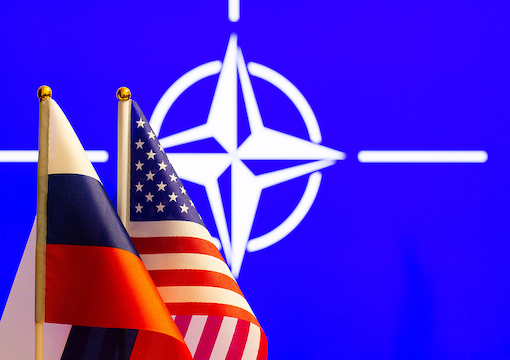 “All the people who will die starting from this day will … die because of you,” said Zelensky to NATO, “because of your weakness.”

“Given Russian military doctrine, such a war could swiftly escalate to the use of tactical nuclear weapons.”

“NATO is not party to the conflict. NATO is a defensive alliance. … We don’t seek war, conflict with Russia. … We should not have NATO planes operating over Ukrainian airspace or NATO troops on Ukrainian territory.”

“Ours is a defensive alliance. We seek no conflict. … President Biden has been clear that we are not going to get into a war with Russia.”

President Joe Biden has “a responsibility to not get us into a direct conflict, a direct war with Russia, a nuclear power, and risk a war that expands even beyond Ukraine to Europe. … What we’re trying to do is end this war in Ukraine, not start a larger one.”

U.S. policy in summary: Ukrainians should keep fighting and dying, killing Russians, while we stay out — and cheer them on.

In the greatest European military crisis since NATO was founded, U.S. actions and inaction speak louder than its words.

Simply put, establishing a no-fly zone over Ukraine would entail U.S. planes and pilots shooting down Russia’s planes and pilots. This would mean war between Russia and America. Given Russian military doctrine, such a war could swiftly escalate to the use of tactical nuclear weapons.

Bottom line: We are not willing to risk war with Russia over Ukraine, as that nation of 44 million is not a vital interest nor a member of NATO.

We will not establish a no-fly zone over Ukraine, as that would mean war with Russia. But had Russia attacked Estonia, not Ukraine, we would be at war with Russia, because Estonia is a member of NATO.

To repeat: If Russia attacks its neighbors Finland, Sweden, Ukraine, Moldova or Georgia, we stay out of the war. But if Russia attacks Lithuania, Latvia, Estonia, Slovakia, Romania or Bulgaria, we go in, even at the risk of nuclear war.

Does this seem logical? Does this make sense?

Why are we committed to do for Bulgaria — risk war with Russia — what most all agree would be insane in the case of Ukraine?

On this, Russian President Vladimir Putin has been clear and convincing.

Any attempt to establish a no-fly zone over Ukraine will be treated as an act of war. And Russia reserves the right to attack any nation whose planes are enforcing this no-fly zone.

As for the transfer from former Warsaw Pact countries like Poland of older MiGs to Ukraine, for use against Russian troops, says Putin, this would be an act of war, and Russia would retaliate against the nations putting the MiGs into the fight.

Biden also met last week with President Sauli Niinisto of Finland, a neutral nation that shares an 833-mile border with Russia. Niinisto may be considering membership in NATO.

Yet, this presents problems, among them the warning Friday from the Russian Foreign Ministry’s Maria Zakharova:

“We regard the Finnish government’s commitment to a military non-alignment policy as an important factor in ensuring security and stability in northern Europe. … Finland’s accession to NATO would have serious military and political repercussions.”

If the Finns show an interest in joining NATO, would NATO defend Finland against Russian military action while its application for membership in NATO was being considered?

Would all 30 members of NATO welcome a new member, with 5.5 million people and a long border with Russia, for whom all of NATO would be obliged to go to war with Russia, under the Article 5 war guarantee?

Recall: NATO membership for Georgia and Ukraine were subjects of allied discussion, before they clashed with Russia.

That discussion has since been put on the back burner.

How would adding a new nation to defend, a new duty to fight the most heavily armed nuclear power on earth, Russia, serve U.S. interests, when Stoltenberg, Blinken and Biden seem hugely relieved we don’t have to fight for Ukraine now?

Did Ukraine’s trolling for membership in NATO trigger Putin’s war?

“The Russian invasion of Ukraine resulted from two immense strategic blunders, (Russian historian) Robert Service says. The first came on Nov. 10, when the U.S. and Ukraine signed a Charter on Strategic Partnership, which asserted America’s support for Kyiv’s right to pursue membership in the North Atlantic Treaty Organization. The pact made it likelier than ever that Ukraine would eventually join NATO — an intolerable prospect for Vladimir Putin. ‘It was the last straw,’ Mr. Service says. Preparations immediately began for Russia’s so-called special military operation in Ukraine.”

An alliance established to prevent war may have just ignited one.