Useful Idiots in the NFL 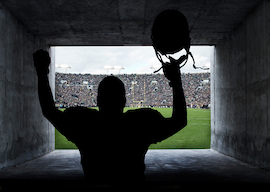 According to Reid, Jenkins—the founder of the NFL Players Coalition—used the protest movement started by Colin Kaepernick to advance his own interests. Said Reid after the game:

I believe Malcolm capitalized on the situation—he co-opted the movement that was started by Colin to get his organization funded. It’s cowardly, he sold us out.

[Jenkins] was corrupt from the jump. He knew what he was doing. His goal was to sell us out and he did that.

In stark contrast, Jenkins was gracious and high-minded toward the man who had attributed such a low motive to him:

You couldn’t pay me to say anything negative about them. I look around the league and I’m proud of guys that are active in their communities, that are using their voice as a platform like never before—including Colin and including Eric. I think he deserves to have a job in this league, I’m glad that he does have one. I think that his talent is speaking for itself. I think his stance is the only reason he was not in the league.

Though a fine player, Reid was signed to a one-year contract just last month, having been an unemployed free agent for the previous six months. The reason, many believe, is that the NFL didn’t want anything to do with the bad publicity his protests generated.

Like his friend Colin Kaepernick, with whom he shares a pair of attorneys, Reid has filed a grievance against the NFL. The league’s owners, he alleges, “colluded” to keep him off the field. Like your grandmother when she got chicken pox, the owners were influenced by President Trump, according to Reid.

For me, this is a millennial-all-too-millennial story. A couple of men alienate their employers and potential employers, and so wind up out of the league. Instead of learning a lesson, they claim to be victims. Nor is that a wonder, seeing as such behavior is often rewarded.

It is interesting that the arbiter of Reid’s grievance is University of Pennsylvania law professor Stephen Burbank. Last year, Burbank was one of 33 UPenn law professors who, with that cheap moral smugness that comes effortlessly to American academics, signed an open letter condemning their colleague Amy Wax. You see, unlike good scholarly cattle, Wax dares to believe that “all cultures are not equal.” Rather than argue against that formidable advocate for “the bourgeois script,” these professors took the easy, pseudo-moral route. I wrote about the controversy at length, and from what I know of Burbank, I’d expect him to rule in Reid’s favor.

Let’s get back to Reid and Jenkins. Marcel Louis-Jacques, writing in The Charlotte Observer about their differences, reports:

Both players speak against similar issues—including systemic oppression within the United States’ criminal justice system and inequalities within the nation’s educational system….

“Like many people who are neither very intelligent nor very well-informed, professional athletes are readily exploited by Democrat politicians.”

That’s not to say Reid and Jenkins always saw eye-to-eye. While Reid, Kaepernick and dozens of other NFL players opted to kneel during the national anthem, Jenkins instead raised his fist in the air.

Reid took that as a sign Jenkins had the league’s best interests at heart, not the protesters’. When Jenkins asked the Players Coalition if it would consider ending its protests if the NFL donated money to causes important to coalition members, Reid hit his breaking point and left the group.

Of the two men, Jenkins’ conduct clearly has been the more admirable. As we’ve seen, he didn’t respond to Reid’s personal attack with one of his own. And what is far more important, he tried to end the protests.

By contrast, Reid—who’s never engaged Jenkins in a substantive manner concerning their differences—seems not to have even considered that the NFL may not be the proper medium for airing his political opinions. So too, he seems not to realize that NFL owners are surely within their rights if, in view of his egregious behavior, they choose not to employ him. This year Reid will earn a little under 1.7 million dollars. For all that, he doesn’t keep his mouth shut about subjects he obviously doesn’t understand.

Of course, in itself Reid’s attack on Jenkins is trivial and not worthy of attention. Its interest lies in the fact that these days, professional athletes are more and more useful idiots for the Democratic Party. Like many intellectuals, professional athletes tend to think that unequal outcomes signify “systemic oppression.” But like many intellectuals, they don’t inquire rigorously into contexts. So they don’t know, for instance, that the popular narrative about murderous cops and innocent black victims doesn’t withstand scrutiny.

Relative to their percentage of the national population, a disproportionate number of young black men are shot and killed by police. It’s little known, however, that, like their incarceration rates, this is perfectly consistent with the disproportionate number of violent crimes committed by young black men. In fact, given that “racial disparity,” which no one is supposed to talk about, it would be quite strange if the other “racial disparity,” so very controversial, didn’t exist. Moreover, however counterintuitive it may be for many, police are much more likely to be shot and killed by young black men than vice versa.

I don’t mean to imply that young black men or blacks in general are not still victims of racism in some instances, nor that these persons are not sometimes unjustly killed by police. My point, again, is that the popular narrative about murderous cops and innocent black victims is false. The reality is much more complicated—and politically incorrect—than that.

Despite slavery and Jim Crow, there has been a lot of progress for blacks in this country. Still, owing largely to group differences, inequalities—which are not the same thing as injustices—remain. And on the whole, understanding these is a very difficult business. Indeed, it is a huge problem for democracy in general that, while we all are creatures of passion, very willing to interpret events in a manner that suits our own moral psychology, there are relatively few people who think well and who are willing and able to inquire into complex contexts with disinterestedness. Time and time again we see mankind believe what they want to believe independent of the facts in question. This seems remarkable, and yet, since the mind is by its very nature a self-interested, functional thing, it is perfectly natural, although hardly good news for anyone who values rational, fair-minded government.

Then too, given the overwhelmingly biased, dishonest, and incompetent media, it is only too easy for people to believe the moralistic simplifications that are constantly disseminated. In this regard sportswriters are predictably baleful. Turn on ESPN and lo, there they are, those squeaky-voiced, effeminate liberal men offering their worthless two cents on “racial inequality.” (So faithful are these spineless bores that Rich Lowry, Ben Shapiro, and other lefty hacks may wish to recruit them for Conservatism Inc.)

Like many people who are neither very intelligent nor very well-informed, professional athletes are readily exploited by Democrat politicians, who are nothing if not cynical. When President Trump invited the Eagles to the White House after the team won the Super Bowl, several players made it clear that they wanted nothing to do with the man. Ever pugnacious, Trump withdrew the invitation, getting into one of his familiar war of words. No doubt many blacks, observing the affair, thought to themselves: “All the more reason to vote against that racist.”

Meanwhile, wherever Democrats have long been in power, we find that, thanks to their policies, blacks are worse off than they are elsewhere. It is so here in the City of Brotherly Love, for example. Only New York City and Chicago have more blacks, yet unlike those cities, Philly is and has long been the poorest big city in the country.

One night in July, a 27-year-old white man named Sean Schellenger and two other white men were driving through an alley in the affluent Rittenhouse Square section of the city. Having got stuck in traffic, they got out of the car in order to get a driver in front of them to move. Then the group encountered a bicycle courier. If you’ve spent much time in Philly, what happened next probably won’t surprise you: An argument broke out, it turned physical, and the person on the bicycle, a 20-year-old black man with a long rap sheet named Michael White, fatally stabbed Schellenger. (His death occurred in an unusually violent period in the city, 46 people being shot in the first ten days of July alone, according to police statistics.)

For Larry Krasner, America’s most progressive district attorney, this tragic event became an occasion for realizing his general social justice agenda. Television footage of White’s preliminary hearing showed Krasner comforting White’s mother. Not Schellenger’s mother, but White’s. Asked why he was there, Krasner told reporters that he wanted to make sure White was treated fairly (read: that he got as little time as possible). It was as if Krasner had no clue who the actual victim was. Needless to say, such behavior is only to be expected from a longtime public defender whose DA campaign was funded by George Soros.

In a statement to ABC, Linda Schellenger, Sean Schellenger’s mother, said the truth about Krasner:

He was intellectually dishonest. He overruled his own prosecutors. They have clear video footage that would have allowed them to hold [White] on murder 1 and no bail. Larry showed up at a preliminary hearing, which is rare, to grandstand for political purposes. My son has become his political pawn. I wanted to trust him. He breached and abused that trust.

Blacks in Philly are fond of Krasner, who, like his fellow cuck mayor Jim Kenney, is all about reforming the “racist” criminal justice system and keeping ours “a sanctuary city” for “undocumented immigrants.”

It goes without saying that such inept leadership at the highest level does nothing to help blacks or anyone else. As long as you seek to pardon people where personal reform is needed, they have every reason to continue to err.

Incidents like Sean Schellenger’s death, being underreported, are far more prevalent than most people know. Blacks commit crimes against whites—especially violent ones—at far higher rates than whites do against blacks.

Whether any black NFL players are aware of that, I don’t know. At any rate, to my knowledge none has ever spoken the complete truth about those thorny subjects, crime and race and the police. As things are, these rich and increasingly vociferous athletes appear likely to continue to use their considerable influence to help elect the party that is so harmful to blacks in general.

Thus Democrats, and their globalist donors, are able to live well, while blacks on the whole continue to struggle. As a great philosopher once said, folly is its own burden.