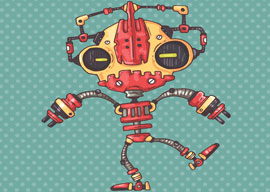 “The book that people are reading now,” according to Lion of the Blogosophere, is Brynjolfsson and McAfee’s The Second Machine Age. I hastened to buy a copy and read it…so you don’t have to!

The authors are professional Deep Thinkers with positions at the MIT Center for Digital Business, which you can read about at that link should you care.

So what’s it all about? The Second Machine Age is an addition to the growing pile of books about the vanishing middle class, books such as Charles Murray’s Coming Apart and Tyler Cowen’s Average is Over. If you haven’t been paying attention, here’s the message: Great swaths of the pen-pushing middle classes are about to lose their jobs to smart machines.

The authors offer TurboTax as an illustration. Why use an H&R Block tax preparer when, for much less money (the basic version costs $29.99) and a modest investment of time, TurboTax will do the job for you? You get a better service at a lower price. The creators of TurboTax get rich”one is a billionaire. Tens of thousands of tax preparers lose their jobs.

“Great swaths of the pen-pushing middle classes are about to lose their jobs to smart machines.”

This has been going on for a while. You could ask a travel agent; or, much easier to find, an ex-travel agent.

Brynjolfsson and McAfee did a New York Times op-ed after their original e-book came out, and it’s accompanied by a striking graph. The graph shows private employment and productivity since 1947. The two curves rise together until the year 2000. Then the productivity curve keeps on rising, but the employment curve flattens out. The authors call this a “decoupling.” There is no reason to think there will be a re-coupling, ever.

Yes, folks, it’s official: The future”the quite near future”will have less and less use for human workers. Software or gadgets will do the tasks that millions of people now do for modest middle-class salaries. The software and gadgets’ creators will get tremendously rich without employing many people. WhatsApp, whose entire payroll headcount seems barely to have made it into two digits, sold for $19 billion.

It’s all happening very fast. The field of Artificial Intelligence was dominated for decades by Moravec’s Paradox: Tasks that are very difficult for human beings, such as playing grandmaster-level chess, are fairly easy to get computers to do, while tasks any two-year-old can accomplish, such as distinguishing between a cat and a dog, are ferociously difficult to computerize.

That’s beginning to look quaint. The authors tell us about some robotics researchers working on SLAM”simultaneous location and mapping. That’s the mental work of knowing where you are in an environment and where other things are in relation to you. It’s the kind of thing the human brain does well, with very little conscious thought, but which is hard to get machines to do.

In 2008 the researchers were close to despair. A review of the topic that year described SLAM as “one of the fundamental challenges of robotics…[but it] seems that almost all the current approaches cannot perform consistent maps for large areas….” Three years later, thanks to the development work behind the Xbox Kinect accessory, SLAM was a solved problem.