“We”re adding a little something to this month’s sales contest. As you all know, first prize is a Cadillac Eldorado. . . . Second prize is a set of steak knives. Third prize is you”re fired.”
“Blake (Alec Baldwin) in Glengarry Glen Ross (1992)

Washington, it has been said, is Hollywood for the ugly, and, indeed, great beauties are a rarity in the nation’s capital. So I was doing Richard Spencer a huge favor in December 2007 by introducing him to Michelle Lee Muccio. 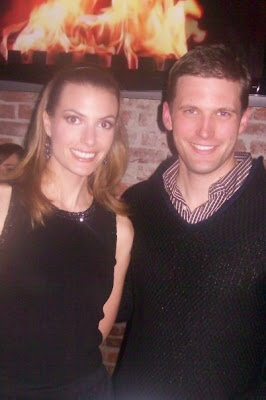 An associate at the free-market Acton Institute, Miss Muccio became an Internet celebrity this past week with a YouTube video advocating a payroll-tax holiday instead of the $789 billion “stimulus,” which the 111th Congress (may it live in infamy) just passed. Her video sparked more than the usual quota of hubba-hubba comments when it was posted at HotAir.com, and I immediately seized on the occasion to chide Richard for having missed his shot. That was one of those “Glengarry leads,” pal.

The chivalrous Spencer has challenged me to a duel for having “slandered Michelle Lee Muccio’s good name” by allegedly implying that she were attached to someone as morally suspect as himself.

No such implication was made, of course. I merely introduced a handsome young conservative editor to a pretty free-market activist and continued circulating around the holiday cocktail reception. When I circulated back around 15 minutes later and found these two fine-looking youngsters still engaged in friendly conversation”well, excuse an old romantic for supposing that Richard’s interest in Miss Muccio was not strictly professional.

“Alas””and let the record show that word as directly quoted from Spencer himself”he lacked the Always Be Closing instinct, and so they went their separate ways. Spencer has since relocated to New York where, he hastens to assure me, he does not suffer a shortage of female companionship.

Right. And those grapes were probably sour anyway.

“All seductions begin by flirting. Flirting is the key which turns the engine on. It is as simple as that. Without flirting you cannot seduce, and without seduction the race becomes extinct.”
“Taki Theodoracopulos

She was sitting at my desk when I returned from covering a softball game late one afternoon in October 1987. I”d been sports editor of the Calhoun (Ga.) Times for about six weeks and was surprised to find my desk occupied by a pretty brunette, but happy to have a ready-made excuse to talk to her. The newspaper was having its annual subscription drive, and the brunette was one of several temporary sales people brought in to work the phones that evening. She apologized and moved to a nearby desk, and I spent the next hour or so flirting with her while I filed my report of the softball game.

Love at first sight? I don”t know if I believe in that, but she was definitely one of those “Glengarry leads.” In less than two years, we were married and had a newborn baby (in that order!). And I”ve spent the past 20 years being congratulated on my good fortune by friends who, upon being introduced to my wife, invariably wonder in amazement how such a classy beauty ended up with a guy like me.

As Valentine’s Day 2009 arrives, the desperate real-estate salesmen of Glengarry Glen Ross are an apt metaphor for the romantic plight of our age. Plenty of prospects out there”there are some 24 million women ages 18-29 in the United States”but guys can”t seem to close the deal: 65 percent of those women have never married. The median age at first marriage for women, which was 20 in 1960, is now at an all-time high of 25.3, and spinsterhood is an increasingly common fate. Thirteen percent of women 40-44 have never married, reflecting about a one-third rise since 1980 in the likelihood of being an old maid, a percentage that can be expected to increase given the current low marriage rates for young women.

Of course, a rare beauty like Miss Muccio will almost certainly land a husband sooner or later, and for all I know, she may already have found the lucky fellow she”ll lead to the altar. Yet the fact that she could reach age 27 and still be single is a sad testimony to the lack of romantic ardor among our nation’s young bachelors.

Spencer blew his big chance with Miss Muccio, but he’s a lad of great promise and not too shabby-looking himself, so perhaps other opportunities will come along. As a matter of fact, I have in mind a certain blue-eyed stunner who”ll be in Washington for the Conservative Political Action Conference in two weeks. She’s a writer, he’s an editor”strictly an introduction of two young professionals, you understand.

She’s another “Glengarry lead,” Richard. Remember: Coffee is for closers. And second prize is the steak knives.