Vanity Through the Years 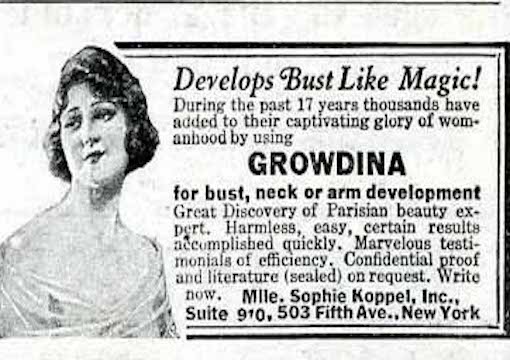 Skin, according to the song, is what keeps the insides in. It does far more than that, of course, and for many of us it is the most important organ of the body, if our willingness to spend money on it is the criterion by which attributed importance is to be judged. Even people who are not normally willing to pay to see a doctor will make heroic sacrifices to consult a dermatologist privately.

This should not really surprise us. We are told that we should not judge by appearances, but much of the time we have nothing else to judge by, and we all do so on meeting people for the first time. Skin is then more immediately evident than character, though it is also true that facial features and expression frequently give the game away.

I was going through my collection of pamphlets the other day when I alighted on one titled Cosmetics and Allied Preparations, published by the American Medical Association in 1938. In those days, the AMA put out a series of pamphlets for the general public warning it against quackery, though perhaps it ought to be said that by current standards of scientific evidence, much of medical practice in those days would now be considered quackery. Among the pamphlets were those exposing patent medicine “cures” for such conditions as consumption (tuberculosis)—the first effective drug against it being still some ten years off—obesity, deafness, and what was called “female weakness.” I suspect that the latter was unwanted pregnancy.

“Perhaps my favorite preparation was Growdina. This was a bust-developer.”

But to return to cosmetics and allied preparations: There is poetry, or at least romance, in their names. Who could resist Berry’s Freckle Ointment, Mrs. Bradley’s Face Bleach, Frostilla, Gouraud’s Oriental Cream, Neal’s Olivine, Sempre Giovine, and many others? Hair preparations include Grayban and Hair-A-Gain, both of whose alleged properties would now be of use to me.

Grayban, says the pamphlet, “is sold under the misleading claims common to the manufacturers of so many hair dyes.” Grayban is alleged (1) to be the discovery of “a great scientist” who had labored for years to find a way to “bring back natural color to gray hair,” and (2) to be the “miraculous discovery of one Carmelia Gomez, a woman who came from Trinidad.” Alas, it was shown that Grayban dyed gray hair the same hue whatever the hair’s original color. Apparently, the experiment to prove it so was published in the Journal of the American Medical Association.

As for Hair-A-Gain, it owed its discovery to Georgia O. George of Los Angeles, who advertised herself as the “Inventor, Originator, and Sole Manufacturer [note the capital letters] of Hair-A-Gain Shampoo and Mask O’Uth Liquid Mask and Scientific Sytemethod.” The pamphlet says:

Hair-A-Gain Scalp and Hair Shampoo is a duplex affair. It consists of a can of paste, or pomade, and a bottle of liquid soap. The paste is to be smeared over the head, covered with wrapping paper and a towel, and left on overnight; the gooey mess is then removed the following morning with the aid of the liquid shampoo.

It seems to me, however, that Georgia O. George had understood one of the most important principles of medicine as long practiced: to make the treatment so onerous and disgusting that, if it did not cure the patient’s condition, it at least discouraged him from complaining further about it.

Who could resist La Toilette Française, La Tosca Hair Tonic, Lavona de Composée, or Lucky Tiger, which not only prevented hair from falling, but cured aching feet? Mahdeen, which supposedly “dissolved dandruff,” also caused “a very severe case of poisoning of the scalp, which extended throughout the whole body,” according to one user, no doubt beguiled by the offer of money back if not cured. Analysis showed that Mahdeen contained quinine and arsenic.

Calocide—this was in the days before genocide had been heard of—was a “positive cure for all foot trouble.”

All pain disappears instantly and the feet feel simply delightful. Corns and calluses can be peeled right off. Bunions, aching feet, and sweating, smelling feet get immediate relief.

Feet feeling simply delightful is not quite as foolish a notion as one might suppose. He who has suffered severe backache, for example, will know how delightful a back can feel once the pain subsides, especially if it does so quickly.

Perhaps my favorite preparation was Growdina. This was a bust-developer. It was sold:

…by one Sophia Koppel of New York City, who advertised that she was a famous Parisian beauty culturist who had discovered the preparation “Growdina,” which she declared was a tissue builder. After investigation by the Federal Trade Commission, Sophia Koppel agreed to cease advertising that her preparation was a tissue-builder or that she discovered it, or that she was a famous Parisian beauty culturist or that the preparation had a reputation on two continents, or that it was scientifically prepared and was capable of introducing a tissue-building food into the flesh.

Not much remained of Growdina’s claims, then, but the really interesting question is whether its sales collapsed altogether afterwards. Disproof and disuse are by no means the same thing, however. No matter how many times capitalism survives crisis, for example, Marxists continue to believe in its imminent or eventual collapse.

Perhaps we should not be too hard on the gullible purchasers of all the nostrums exposed and ridiculed in this pamphlet. It is not as if orthodox medicine offered solutions to most of the problems that the patent medicines were advertised to solve. No doubt the nostrums were in one sense exploitative of misery or at least of desire: The cost of the ingredients of Luzier’s Face Powder, for example, was 3 cents, that of its container 5 cents, and it sold for a dollar.

But what is the price of hope? If Luzier’s Face Powder had been sold at a markup of, say, 12 and a half percent, that is to say for 9 cents instead of a dollar, it probably would not have sold at all, for everyone knows that hope is not cheap. That, no doubt, is what my financial adviser is banking on.