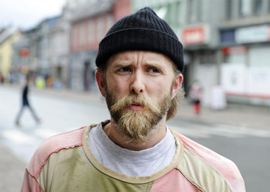 Louis Cachet, the artist formerly known as Varg Vikernes and the mastermind behind one-man black (apparently now formerly) metal band Burzum, is back in the legal hot seat. He was originally arrested with his wife on suspicion of plotting acts of terrorism, but the pair was released after police discovered the Mrs. had permits for all four rifles she”d recently purchased.

Lacking for any actual crimes, planned or otherwise, French authorities quickly indicted on charges of inciting hatred against Muslims and Jews. If convicted, he”ll be in good company: Brigitte Bardot has been fined five times for the same offense.

I”m not a fan of Burzum. I”m not really a fan of black metal, truth be told, though I rock a little Deathspell Omega now and again. Burzum is too lo-fi and grungy for me. And while this might be blasphemous to black metal aficionados, many of whom prefer records apparently recorded inside rusty tin cans, I can”t imagine Burzum would have quite the profile it enjoys today if it weren”t for Vikernes” actual crimes.

In 1992 and 1993, Vikernes (or Cachet or Grischnackh or whatever) burned a bunch of churches to the ground. To call them “churches” is a bit like calling the Mona Lisa “a painting.” These weren”t the local strip mall Churchianity spots where you grab a latte after your pastor tells you how Jesus died so you could have a BMW and a summer place in the Hamptons. These were irreplaceable cultural artifacts. Burning them down was akin to the Taliban’s wanton destruction of the Buddhas of Bamiyan. He was accused of burning the Fantoft Stave Church, erected in 1150, but the jurors voted not guilty on that one. Convictions stuck for the destruction of churches in Bergen and Vindafjord, and the Holmenkollen Chapel in Oslo.

Oh, and he’s also a convicted murderer, by the way. He stabbed Ãystein Aarseth, known in black metal circles as “Euronymous,” a whole bunch of times. This may or may not have been a preemptive strike. We”ll never know, in part because Aarseth is dead and can”t give his side of the story.

Like many others of my generation, my initial interest in Vikernes was sparked when Michael Moynihan profiled him in the now-classic Lords of Chaos. Among other things, Varg is a highly intelligent and thoughtful man, with some interesting ideas and a newsletter that you might or might not wish to subscribe to. People have called him a Nazi, because of course they have, though he rejects the term on the grounds that he is anti-materialist, anti-socialist, and pro-democracy, or at least he likes a certain type of it that no one else seems to believe in.

He’s got a penchant for taking one position in one interview and a seemingly contradictory stand in the next. As both an egoist and an anti-dogmatist, I consider Vikernes” lack of consistency to be a feature and not a bug.

Varg promotes a vÃ¶lkisch narrative, where Christianity is Marxism is modernism, and all are foreign ideals for Western man, destroying our culture with weakness and decadence. This is, of course, the CliffsNotes version, so forgive me for not going into the nuances of VargsmÃ¥l here.

He also believes that dragons and dwarves are real, or at least will be made so after the final triumph of his utopia; his “Nazism” is more informed by Lord of the Rings than Mein Kampf. In other words, you”d do well to take everything he says with a giant, Costco-size grain of salt.

Think of him as a more restrained, Nordic version of Charles Manson. A strange man, with strange beliefs, some of which are rather insightful, if somewhat obvious, and should be thoughtfully reflected upon (spending too much money requires you to effectively mortgage your life to the market, so there’s a value in reducing your living standards and leading a simpler life), while others can easily be rejected out of hand (all the shit about orcs).