Violence in the Name of Compassion 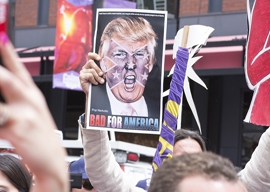 As the elderly black female homeless Trump supporter was curled in the fetal position on the sidewalk while street swine jeered at her from all sides, a black man leaned over and told her that she’d brought it all on herself:

Didn”t I tell you about five minutes ago that somebody’s gonna walk by here and no, I would not defend you? “Cause you spewed hate, and you got hate. You got exactly what you were dishin” out. I told you. I warned you on that.

The woman, still unidentified, had taken it upon herself to protect Donald Trump’s star on Hollywood Boulevard a day after “millionaire activist James Otis” had violently destroyed it last Wednesday morning with a pickaxe in a hissy-fit over news reports that Trump was, like, mean to women or something.

Not only was this woman a Trump supporter, she expressed as much in handmade signs she displayed along with all of her earthly belongings:

20 Million Illegals and Americans sleep on the streets in tents. Vote Trump.

Obama threw our black asses under the bus, he owes the Clintons, flip this script (get off the Clinton plantation).

But a series of three short videos (here, here, and here) show that she did not get exactly what she was dishing out. In reality, she got far worse. Her act of “hate” was attempting to protect a public landmark from further destruction while expressing a rather poignant political opinion”she lived in a country that coddled illegal aliens while she lived on the streets. But in response, she had her signs ripped up and was apparently knocked to the ground by a mob of hateful, dysgenic cretins.

“In the twisted ethical constellation of the modern progressive hivemind, words are not only considered worse than harmful actions, they are frequently mistaken for harmful actions.”

She was only “spewing” opinions. In response, she got pure hate. In the twisted ethical constellation of the modern progressive hivemind, words are not only considered worse than harmful actions, they are frequently mistaken for harmful actions. And if the thoughtcrime is deemed harmful enough”despite the fact that it likely caused no measurable harm at all”any level of retaliatory nastiness is justified.

Sickeningly hypocritical anti-Trump violence committed in the name of fighting some nebulous, dimwitted, and unquantifiable notion of “hate” has become so tiresome that one might be excused for feeling a temporary flash of desire to respond with unforgiving and grievously excessive force.

There was the recent firebombing of a GOP office in North Carolina. Reports of lawn signs being destroyed, cars being vandalized, and people being physically attacked merely for expressing support for Trump have become as routine as eggs for breakfast. There were also two direct attempts to physically harm Trump himself at rallies”one in Ohio and the other in Las Vegas.

And throughout this year there has been apocalyptic anti-Trump mob violence at rallies in Albuquerque, Tucson, Anaheim, San Diego, San Jose, St. Louis, Houston, Orlando, Costa Mesa, Eugene, Asheville, and New York City“all of which the mainstream media saw fit to blame on Trump’s words rather than his opponents’ deeds.

Many had long suspected that these endless waves of violence had been carefully orchestrated by forces sympathetic to the Democrats; recent revelations have proved that these suspicions were justified. In a video recently released by James O’Keefe and Project Veritas, a proud lisping AIDS-bomb named Scott Foval explains how he worked in tandem with the Clinton campaign to foment violence at Trump rallies. These are the words of a man so power-hungry and unmoored from reality, he apparently believes it is possible to “stage” protests that are “very authentic”:

So one of the things we do is we stage very authentic grassroots protests right in their faces at their own events. Like, we infiltrate….The aggressive bird-dogging. What I call it is “conflict engagement.”…We”re starting anarchy. And he needs to understand that we”re starting anarchy….The key is initiating the conflict by having leading conversations with people who are naturally psychotic. I mean honestly, it is not hard to get some of these assholes to pop off. It’s a matter of showing up, to want to get in the rally in a Planned Parenthood T-shirt. Or Trump is a Nazi. You can message to draw them out and message them to punch you….I”m saying we have mentally ill people that we pay to do shit, make no mistake. Over the last 20 years, I”ve paid off a few homeless guys to do some crazy stuff…. It doesn”t matter what the friggin” legal and ethics people say, we need to win this motherfucker….