Virtue-Signaling Yourself to Death 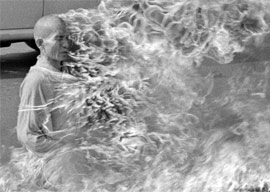 At some point in the early morning hours of Saturday, April 14, gay civil-rights lawyer David Buckel’s life went up in a little gay puff of smoke. As some sort of ill-conceived protest against global warming, the 60-year-old rump-wrangler sashayed into Brooklyn’s Prospect Park, doused himself in fossil fuels, and set himself ablaze.

Fastidiously gay to the last minute, he even apologized for his untidy demise in a handwritten suicide note near his charred corpse:

I am David Buckel and I just killed myself by fire as a protest suicide. I apologize to you for the mess.

A longer note found near his body had also been emailed to news outlets:

Pollution ravages our planet, oozing inhabitability via air, soil, water and weather. Most humans on the planet now breathe air made unhealthy by fossil fuels, and many die early deaths as a result — my early death by fossil fuel reflects what we are doing to ourselves. A lifetime of service may best be preserved by giving a life….Honorable purpose in life invites honorable purchase in death…I hope it is an honorable death that might serve others.

Plainly seeking that his act of suicidal masochism be perceived as honorable rather than self-destructive, Buckel likened himself to self-immolating Tibetan monks who protested China’s occupation of their country.

But at press time, China still occupies Tibet and the weather outside is still warm.

“If there’s a lesson to be learned here, it’s that you shouldn’t take political advice from masochists, or you might wind up dead.”

As extreme as self-immolation is, as much as it causes one to recoil at what appears to be malignant psychosis made flesh, it is not without historical precedent. A group of Russian Christian dissidents called the Old Believers burned “tens of thousands” of themselves to a crisp in the 1600s and 1700s, sometimes by locking themselves in wooden churches and letting it all burn to the ground as they squirmed inside.

A photo of the 1963 public self-torching of South Vietnamese Buddhist monk Thích Quảng Đức to protest Catholic domination of his country’s government became one of the most famous political images in history.

Two years later in an apparent copycat suicide, a 31-year-old Quaker named Norman Morrison poured kerosene on himself outside the Pentagon and left his family fatherless because he apparently cared more about suffering Vietnamese children than he cared about his own children. He had mailed a letter to his wife that stated, “Know that I love thee…but I must go to help the children of the priest’s village.” Only a week later, yet another self-hating white American male named Roger Allen LaPorte turned himself into a charcoal briquette outside the UN building.

And yet the Vietnam War raged on for years afterwards, almost as if no one cared about these suicides, almost as if the military-industrial complex’s official attitude was “please spare us these drama queens; we have a war to fight.”

In the years since that stupid and ultimately pointless war, the public has gradually been trained to believe that the mere act of being white is something to feel guilty about at the very least—and if you’re especially virtuous, you can rack up extra points by killing yourself over it. In 2014 a retired 79-year-old Methodist minister in Texas set himself on fire in a shopping-mall parking lot. Before killing himself, Charles Robert Moore left a suicide note containing the following passages:

I will soon be 80 years old, and my heart is broken over this….America, and Grand Saline [TX]…have never really repented for the atrocities of slavery and its aftermath. What my hometown needs to do is open its heart and its doors to black people as a sign of the rejection of past sins….So at this late date, I have decided to join them by giving my body to be burned….With love in my heart not only for them but also of the perpetrators of such horror….

But despite Moore’s grand gesture, nonwhites seem less willing than ever to forgive America’s whites…for anything. Funny how that works. It’s almost as if the more people bend over, the harder they get drilled.

A richly ironic case of pathological altruism—especially since after all these years of me fruitlessly taunting them, the SPLC finally noticed me—involves the murder of former SPLC writer David Ruenzel, who scribbled endless misguided screeds about “white privilege” and how fearful white folk exaggerated the threat of black crime, only to be murdered while jogging by two assailants who were described as black.

White South African journalist Steven Otter was another glaring case of suicidal empathy. I do not claim to know what twisted psychological reasons led him to live in a sprawling Cape Town ghetto that was 99.49% black, nor to willingly call himself the anti-white slur “umlungu”—which translates as “scum of the sea”—nor to ignore the endless warnings from black and white compatriots alike that one day his misguided compassion would cost him his life, but in December of 2016 two black robbers stabbed Otter to death in front of his black wife and their mixed-race seven-year-old daughter.

Amy Biehl was a white Stanford grad who thought it’d be a good idea to go to South Africa and become an anti-apartheid activist. One day in August 1993, a swarm of blacks dragged her from her car, stabbing and stoning her to death while chanting anti-white slurs. Three of the men who stood accused of murdering her reportedly “burst out laughing in the public gallery of the Supreme Court…when a witness told how the battered woman groaned in pain.” But in 1998, all four men convicted of murdering Biehl were released and pardoned because their crime was judged to have been politically motivated. Most disgustingly of all, Biehl’s father shook the men’s hands upon their release, stating:

The most important vehicle of reconciliation is open and honest dialogue… we are here to reconcile a human life [that] was taken without an opportunity for dialogue. When we are finished with this process we must move forward with linked arms.