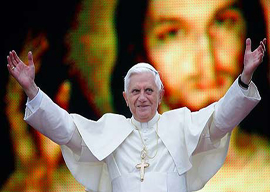 Albert Einstein’s damning-if-quirky verdict on Marie Curie’s character was that she “has the soul of a herring.” I am reminded of his words every time I hear yet another bloodless and desiccated scientist pronounce that God is finished and has no place in modern life. What spoilsports. And how cruel to the old man up there with the world-weary look and long white beard.

What makes it worse is that our spiritual yearnings and apparent superstitions are dismissed, in the case of Stephen Hawking, by a nerd with a Dalek’s voice box. The motley parade of secularists, humanists, and atheists might know a bit about the cosmos or what happened in the seconds after Big Bang, yet they have scant grasp of existence’s true soul and mystery. Ask them what happened in the moments before creation or to explain the life-fire that burns in humankind, and they will fall strangely silent. Belief has its place”it has since man possessed an opposable thumb and could draw on a cave wall”and will continue regardless of any smug intervention by media-friendly automatons wheeled from their labs and radio telescopes into television studios” welcoming and irreligious embrace.

Churchill had it right. Commenting on the forthcoming defense of Britain against the Nazis poised across the Channel, he bluntly stated: “Upon this battle depends the survival of Christian civilization.” Though no God-squadder, he comprehended that Christian values are fundamental to our being, that the Christian church has a role, that the values of tolerance, democracy, liberty, and fair play which underpin our way of life are rooted in Christian teaching. The interdependence is obvious and so, too, are the risks to both. Pope Benedict perceived the danger when he commented on the aggressive forms of secularism now sweeping Britain. He is no fool. Every nation should have its moral core, its faith identity, its still, small voice of calm. Religion provides dignity and gravitas, finds the words, and lends dimension whenever a country celebrates or mourns. We dismiss it at our peril and would lose much through its abandonment. Humanism does nothing to fill the void.

In Benedict lies a church leader unapologetic of his faith and actually willing to voice an opinion”a miracle in itself.

Those skeptics would argue God consistently lets us down. But I challenge them to find a human who does not. The 20th century’s worst atrocities were perpetrated by monsters”Hitler, Stalin, Mao Zedong, and Pol Pot”with an avowed hatred for religion. Conversely, much of the underground resistance to them was organized and inspired by faith-based groups such as the Kreisau Circle and the White Rose in WWII Germany. I have met survivors of disaster and pogrom, those who have been in battle, and others who walked as living skeletons from captivity in Japanese POW camps. All of them prayed. All of them found comfort and strength in God. Tell that to the doubters and to Hawking and Dawkins.

Like many of my peers, I am a lazy and laissez-faire Anglican, more attuned to coffee and a chocolate biscuit after a Carol Concert than anything too rigorous and reflective. Yet a year ago I visited Jerusalem and a church in the Garden of Gethsemane and found that I wept. For on this site a good man was betrayed and handed over for torture and execution; on this site, the leader of an obscure religious sect that preached love and hope and redemption began a journey that changed the world forever. And suddenly, what mattered to me was not doctrinal differences or individual bishops and priests” failings, nor the bickering between churches or the punch-ups in the Holy Sepulchre. What actually counted was the light cast by the message and the Word’s purity. It was worth shedding a tear.