Wading in the Zeitgeist 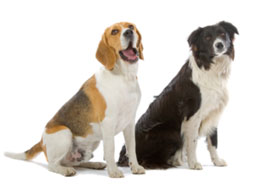 A Beagle and a Border Collie

Like apparently everybody who can read, still a probable majority in the U.S., I have just finished Nicholas Wade’s A Troublesome Inheritance, which deals with the genetics of human behavior, race, intelligence, how they came about, and related things about which one must never, ever state the obvious. It is a fine book: cogent, well-informed, devoid of political propaganda. Anyone interested in the foregoing matters should read it. If you are a Democrat, have it shipped in a package marked Weird Sex Books to protect your reputation.

It is creating a great disturbance among professors, the right-thinking press, those college students who have heard of it, race panders, and related herbivores. This is curious. Reduced to a sentence, Wade says that genes have a lot to do with human outcomes. Its major conclusions have been accepted or suspected forever in every blue-collar bar in the country. Yet they are a shock in faculty lounges. It is interesting to consider the pattern of views:

The Lounge: Race is a social construct. It doesn”t biologically exist.

Wade: Yes it does. (He demonstrates this with things like base pair repeat units and single-nucleotide polymorphisms, a bit messy to go into here.)

Joe’s: Sure, race exists. Just look. (If it doesn”t, then everyone who has received benefits based on race should repay them, and face fraud charges.)

The Lounge: No genetic or group differences in intelligence exist.

Wade: Yes they do; they are measurable, and came about through natural selection.

Joe’s: Sure. Everybody knows Jews are smart, blacks aren”t, and the Chinese and Japanese must be smart too because look at what they”ve done.

“Any dog breeder will tell you that Chihuahuas and Great Danes are not social constructs. Only a professor could think otherwise. The breeder will also say that border collies are smarter than beagles. This is genetic, not due to border collie privilege.”

Races are genetic subspecies, slightly blurred at the edges, of Homo (doubtfully) sapiens, just as Dobermans and chow chows are subspecies of dog. Any dog breeder will tell you that Chihuahuas and Great Danes are not social constructs. Only a professor could think otherwise. The breeder will also say that border collies are smarter than beagles. This is genetic, not due to border collie privilege.

He will further assert from experience that much of behavior is genetic. If you think the personalities of pit bulls and cocker spaniels are equally warm and fuzzy, you probably need to stay away from dogs.

It is also clear to inhabitants of the real world that genetic differences in behavior exist between the sexes. Raise a heifer”for readers under thirty, that’s a little-girl cow”and a little-boy cow completely apart from other cows, so they learn nothing from cow culture. After they reach puberty, go into their field, throw rocks at them, and observe the differences in their reactions. (Put me in your will before doing this.)

Genes count. It’s how things are.

Much more interesting, because less obvious, is the case Wade makes for a genetic element in differences in behavior between genetically distinct groups. For example, East Asians consistently come out ahead of Caucasians on tests of intelligence, yet Caucasians dominate by a wide margin in inventiveness. Why is this? Wade asserts, somewhat speculatively but with a lot of evidence, that natural selection has shaped the Chinese and Japanese to form collectively-oriented, hierarchical societies, not favorable to independent thought.

While the collectiveness of East Asians might be argued, it fits a lot of observation. I am reminded of the Asian proverb, “The nail that stands up will be driven down,” versus Johnny Paycheck singing “You can take this job and shove it.”

In the U.S., Asians way outperform Caucasians in the hard sciences. For example, Caltech is perhaps the most demanding technical school in the country, and does not practice affirmative action. It is 1% black, 8.3% Hispanic, and 40% Asian. Yet a list of founders of high-tech firms doesn”t show as many Asians.

How did we get where we are? Through natural selection, says Wade. It is indisputable that selection can alter a species or subspecies. The unnatural selection which we call selective breeding produces animals of different sizes, shapes, and temperaments. Why would we think that human animals are different? If flu regularly killed those susceptible to it, presumably those genetically resistant would come to predominate. This is both reasonable and observable.