Wakanda Blockbuster Is This? 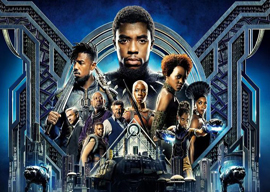 Stalin famously had a buzzer installed to let his sweating henchmen know when it was finally safe to stop applauding the Great Leader without fear of being sent to the Gulag.

In this era when it’s nearly mandatory to greet each new black cultural product as effusively as if it were a cross between the Five Year Plan and a Special Olympics gold medalist, it’s difficult to tell the frauds, such as Kehinde Wiley, the self-promoting Photoshopper culpable for Obama’s humiliatingly incompetent official portrait, from the sincere mediocrities, such as Ta-Nehisi Coates, from the competent professionals, such as Ryan Coogler, director of the vastly overhyped but not-bad movie Black Panther.

Coogler, the young black director of the fine Rocky franchise movie Creed in which Apollo Creed’s son enlists the aged Rocky Balboa as his trainer, benefited from the Marvel superhero factory’s usual quality control. Plus, he was granted a $200 million budget rather than Marvel’s typical $150 million budget. And he was allowed to make more of a stand-alone movie than the usual Marvel Universe pictures, which are often mostly just a way to get from, say, Point P to Point R in studio boss Kevin Feige’s vast master plan.

Still, Black Panther is more interesting than entertaining, being short on humor and star power.

Of course, one reason it is interesting is that it has brought out hilariously delusional statements from the respectable press about how the existence of Wakanda proves Trump wrong. For example, The New York Times proclaimed:

To the politically minded, the Wakanda of ‘Black Panther’ offers an almost too perfect rebuttal to President Trump’s comments in January in which he referred to African nations with a disparaging expletive.

I mean, does Norway have vibranium-powered flying cars like Wakanda does?

“Black Panther is more interesting than entertaining, being short on humor and star power.”

Marvel doesn’t pay its actors well (unless you are Robert Downey Jr.), so the nearly all-black cast is drawn from the junior varsity. As royal cousins battling for the throne of Wakanda, a reactionary utopia set in deepest Africa, Chadwick Boseman (as the wise king of Wakanda) and Michael B. Jordan (as his radical cuz from Oakland) are serviceable but not charismatic.

Two previous fantasy movies about African monarchies, Eddie Murphy’s Coming to America (the third-biggest box office hit of 1988) and the animated Lion King (one of the most profitable properties ever, when the immense stage revenues are counted in), featured far more star power, with, for instance, James Earl Jones playing the elder king in both.

Coogler’s movie emphasizes the cultural differences in behavior between African and American blacks. But Jordan’s American from the hood just seems thuggish, while Boseman comes across as noble but dull and sexless due to an excess of what John Updike described as “the prissy African manner.”

Moreover, Coogler’s staging of Black Panther’s many fights is choppy and repetitious, his dialogue is self-serious, there are too many minor characters to keep track of, and the film runs too long.

On the plus side, Black Panther’s blatant conservatism is an intriguing example of how most of this decade’s cultural energies are flowing toward the right, even when disguised by worship of blacks.

Since its first self-produced film, 2008’s Iron Man with Robert Downey Jr., Marvel has tilted subtly to the right. For example, Iron Man 2 in 2010 was the first movie I can recall that dared even briefly to satirize Obama.

Much of Marvel’s leadership over the past two decades, such as its reclusive chairman Isaac Perlmutter, a veteran of the Six-Day War, is a product of the Zionist right. (A little-noticed trend is that hardheaded Israelis are playing a larger role behind the scenes in American movies. For example, Bibi Netanyahu’s current legal troubles in Israel are tied to a $750,000 payment from Arnon Milchan, a Hollywood producer and apparent Israeli nuclear spy who would make a good James Bond villain.)

Wakanda is a sort of black Zion mixed with the governmental structure of Israel’s new best friend forever, Saudi Arabia, augmented by the xenophobic policies of Japan during the Tokugawa shogunate.

As the popularity of Coming to America, The Lion King, and the 1885 best-selling novel King Solomon’s Mines attests, outsiders have long felt Africa should have more kings. While monarchies might be old hat in the West, they would have been a step up for most of Africa, due to precolonial Africa being stuck at a lower level of political development from its disease-driven lack of urbanization.

Unfortunately, the recent history of kingship in Africa is less edifying than the fiction.

Coogler says his film was inspired by visiting Lesotho, a high-altitude southern African nation that had avoided most colonialism. The Lesotho influence can be seen in Black Panther’s scenes set above Wakanda’s snow line: Lesotho is a rare sub-Saharan country with a ski hill.

Unfortunately, being more self-ruling down through its history than most other African countries doesn’t seem to have turned Lesotho into Wakanda. Wikipedia reports:

About 40% of the population lives below the international poverty line of $1.25 a day…. In urban areas, about 50% of women under 40 have HIV.

With AIDS becoming less lethal, life expectancy in Lesotho is recently back up to 50 years.