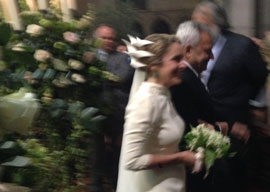 So the wedding of my little girl to Andy Bancroft Cooke went off without a hitch, a wonderful ceremony in a beautiful Catholic church off Portman Square and even the weather played ball and gave us the most perfect spring day imaginable, cloudless and cool, Green Park at its most glorious as we drank outdoors in the long terrace and lunched in Spencer House, which pulled out all the stops.

It’s hard to believe but as I was leaving the church, having performed my duties as father of the bride, a Speccie reader approached me and asked if I had walked her down, or had I been walked down by her? Obviously a loyal reader and one much appreciated. What touched me besides the obvious was Father Colven, the Jesuit priest who is the rector of St. James’s Spanish Place. He spoke on the radio about doubt in such an intelligent manner that everyone who had listened connected with his message. If only there were more people like Father Colven, insightful and warm and understanding.

“It was a wonderful day all around, not too much self-abnegation but no self-aggrandizement nor narcissism even in the depraved club the young ones and I went to that evening in Soho, Father Colven’s message still ringing in my ears.”

Marriage, which is not my strong point, is not the conjugal prison that “cool,” know-nothing poseurs depict it to be. Nor is it a romantic netherworld far removed from everyday life. The rules of social monogamy exist for all-important reasons. Marriage attaches a child’s parents to each other and in turn attaches the couple to the child. Unmarried couples do not stick around when the going gets tough. Once either parent takes off, the child invariably gets into drugs, booze, and delinquency. In Japan, where there are very few divorces, there is no crime to speak of. In Britain and North America, where everyone divorces, these one-parent children are far more likely to end up as criminals. (70 percent of African Americans are born outside marriage.) Fatherless children mean fragmented families, delinquent behavior, and the state taking over the role of the patriarch, creating a still more omnipresent Big Brother.

My new in-laws are very warm and gentlemanly people, and the speeches given by Andy’s school chums were simply brilliant. My own boy surprised me with his almost perfect timing as he told jokes about how his older sister made it plain for the first ten years of his life that she wished to be an only child. (He once fell in the swimming pool in the Hamptons and went under while she watched him, unwilling to get her dress wet as she was going to a children’s party. His mother jumped out from a window and rescued him.) I was allowed very few friends because my daughter had all hers, but Harry Worcester did manage to drop a glass of red wine on a lady who nevertheless found him charm personified. The Schoenburgs were there in force, tall, Germanic, blond, and extremely handsome. My joke that they would look even better sticking out from a Panzer turret did not get too many laughs. (They nevertheless would have been poster boys.) Their aunt Lilly lost all six of her sons on the Russian front, so their reluctance toward the martial spirit is more than understandable. It was a wonderful day all around, not too much self-abnegation but no self-aggrandizement nor narcissism even in the depraved club the young ones and I went to that evening in Soho, Father Colven’s message still ringing in my ears.

Then it was back to the Bagel, a few Brooklyn parties, and lotsa martial arts training. Just before I flew back, I went to a Claus von Bülow lunch that was heartrending in its scant acquaintance with the modern world of hubris and egomania, self-absorption and self-promotion. John Julius Norwich and his Mollie, Claus’s daughter Cosima, the great Nicky Haslam, Annabel Goldsmith, and Melanie Vere-Nicoll, an American lady who is a keen polo player as is her hubby, whose two boys go to Yale, and whose daughter is at my old alma mater, University of Virginia.