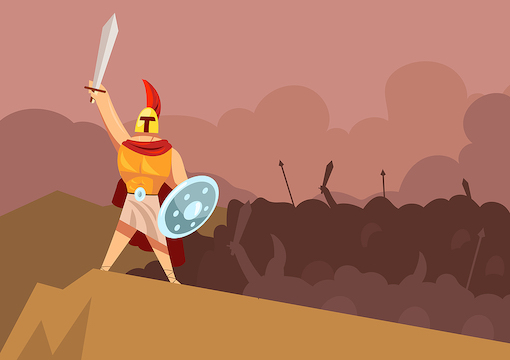 Eighty-two years ago, when Mussolini attacked Greece, the people—deeply offended—simply fought back. Their response followed Plato’s definition of a situation whereby the desire to win a fight is fueled by the desire to have one’s honor restored. Plato called it “philotimo,” the literal translation being “love of honor.” I remember the word and the war quite clearly, my mother’s four brothers and my father going off to the front, the church bells ringing after each victory, a neighbor screaming in agony with the news of her son having been killed in action.

It’s funny how although I had just turned 4, the war that began in late October 1940 remains so clear in my memory. I suppose monumental events such as war outweigh, say, a black actor slapping a black comedian during Oscar time, especially when one’s family and one’s country’s honor are involved. The Albanian border the Italians had crossed into Greece is only a six- to eight-hour drive from Athens, depending on how one drives, hence the fighting felt up close from the start. My mother’s oldest brother, an Olympic hurdler, was among the first to be mentioned in dispatches when he killed an Italian “Alpini” in a fight after having been stabbed by the unfortunate Italian. I say unfortunate because my uncle shot him dead, looked through his papers, and realized he had just killed a 20-year-old. This took place high up on a snowy slope during a bitter winter. Both men were scouting alone for their alpine units.

“It’s funny how although I had just turned 4, the war that began in late October 1940 remains so clear in my memory.”

A question is often asked about why courage is simpler to admire than to define. That’s because the notion of courage is obvious and elemental, whereas it becomes difficult to interpret in terms of something else. An Athenian speaking to Socrates put it this way: “If someone is willing to stay at his post and fight, you may be sure that he is brave.” Not so fast, says Socrates. Old Soc contends that lions are not brave as they lack knowledge of all dangers. Courage, he points out, implies that you know the good things in life for which you must fight courageously, and also the bad things you must fight against.

The ancient Greeks were obsessed with the notion of courage. It was associated with manliness, a word that must be anathema to present feminists everywhere, but in view of my age and background I will use it to my dying day. In Homer, bravery was the hallmark of nobles, heroes, and demigods like Achilles, who were ruthless in battle but very sensitive about their personal honor.

I was brought up learning about these kinds of honor-obsessed men, paragons of male strength, endurance, and patrician manners. (For some strange reason, NBA and NFL fights between behemoths do not remind me of Homeric heroes.) On the other hand, honor-obsessed warriors were often prisoners of their own self-esteem. Excuses, however valid, did not remove blame. Sophocles, the most Homeric of tragedians, illustrates this plight of inherited guilt and self-punishment most poignantly in dealing with Oedipus.

I’m bringing all this up because I’m cruising the Greek islands and reading Greek texts. I was recently asked by someone arranging a school curriculum in the U.S. whom I considered the three greatest Americans. Unlike the Founding Fathers, who were born Englishmen, the three men I named were born-and-bred heroes of mine: Robert E. Lee, Charles Lindbergh, and Ernest Hemingway. He was not best pleased, but I certainly was.

Never mind. Today’s Greece does not have much to brag about as far as heroics are concerned because we have modernized—a horror word—and have gone commercial. But unlike in America, we still follow Socrates’ thinking that virtue is indivisible, i.e., one cannot be a pious murderer or an honest thief, or even a heroic outlaw. In America today there are statues of George Floyd, a career criminal and drug dealer, while those of Jefferson and Lee are gathering dust in some depot. I wonder what Socrates or Plato would think of such outrages.

Back in 1940, Greek troops were ordered to form a purely defensive front, but once the Italians attacked, “philotimo” took over and we counterattacked, driving Mussolini’s army 150 miles into Albania and capturing town after Albanian town. In April 1941, after a French-Italian border town had put up a sign asking the Greek army to stop because they were entering France, a joke too far for the Duce, Hitler came to his rescue and attacked us. Fighting against both Axis powers, we still managed to last six weeks, far longer than Holland, Belgium, Norway, even mighty France itself. My four uncles came back, but the youngest died from his wounds. Old Dad returned and shut down his factories in order not to facilitate the Germans.

Were we wise not to allow the Italians to cross Greece and attack the British in the Middle East? The answer is no, we were not. Were we wise to resist the Wermacht? No, we were not. Would Socrates and Plato have been proud of us? That answer is a resounding yes. Which is good enough for me.