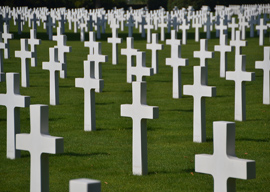 Thinking about Syria, I”ve been rereading The End: The Defiance and Destruction of Hitler’s Germany, 1944″45, Ian Kershaw’s brilliant and comprehensive study of the German home front in the last ten months of Hitler’s war. It serves to remind one that war has always been terrible for civilians as well as soldiers, sometimes even more so, as indeed is the case in Syria today. In one respect Syrians are better off than the Germans were then. Many have been able to get out of the country, often admittedly only to the grim conditions of refugee camps. Germans had no such option. “Why should they have had one?” you may say. “It was their war. Hitler was their leader. They paid the price.”

That war was total war, as the Syrian one isn”t, for all the horror of Assad’s use of poison gas (I”m assuming he is guilty as alleged) and barrel bombs. One of the strange and often unremarked features of the wars in Syria and Iraq today is that civilian casualties are comparatively light if, that is, you compare them to the number killed by the Allied bombing of Hamburg, Leipzig, Berlin, and Dresden. The number of dead in the battles for Aleppo and Mosul can be counted in thousands, perhaps tens of thousands, but not hundreds of thousands as was the case in Germany. Civilian horrors pale also in comparison with what the people of Leningrad suffered in the three years of the siege. No battle in the current Middle East wars”including Saudi Arabia’s war in Yemen”can begin to match the terrible Battle of Stalingrad. The horrors inflicted on civilians by the vile Islamic State fall far short of the mass rapes of German women by the victorious Red Army. As for ethnic cleansing, millions of Germans were driven from the Baltic states, East Prussia, and Poland, where they had been for centuries, and the ethnic cleansing of Germans from Central Europe was a feature of the postwar years. What would become West Germany”then the zones occupied by the Americans, British, and French”had to absorb some 10 million refugees and displaced persons. And I have said nothing about the horrors of the Pacific War and the dropping of atom bombs on Hiroshima and Nagasaki. Finally, nothing in the world today can be compared to the industrial slaughter of 6 million Jews, victims of Hitler’s evil and lunatic obsession with “racial purity.”

“Nobody knows how to stop the war because there are too many parties interested in prolonging it.”

None of this palliates, or is intended to seek to excuse, what is happening, and has happened, in Syria and Iraq. But the fact is that there are always innocent victims in any war. It is understandable that President Trump should have been deeply moved, as he says he was, by pictures of children dying as a result of the use of poison gas. Anyone of any sensibility is revolted by such sights. But…but…but: Remember the chant of Americans protesting against the Vietnam War””Hey, hey, LBJ, how many kids did you kill today?”

“War,” as General Sherman said, “is hell.” As a practitioner of war as terror in his march through Georgia, he knew what he was speaking of. War is always hell (even if there are men who enjoy it). Sometimes it is necessary, as the British and French declaration of war with Germany was necessary in 1939; there seemed no other way of stopping Hitler. But in even the most justifiable war there are what may be judged to be war crimes, often committed by decent and peace-loving men. If in, say, 1930 you had told British and American schoolboys that they would rain death from the air on Germany cities, most would have found the idea appalling. It is awareness that even a just war breeds monsters that makes the wise statesman hesitate and agree with Churchill that “To jaw-jaw is always better than to war-war.”

The Hitler war came close to destroying Europe. The wars in Iraq and Syria have all but destroyed the Middle East. All wars have unforeseen consequences. Whatever your views at the time of the rightness or wisdom of the invasion of Iraq or the toppling of Libya’s Colonel Gaddafi, nobody should doubt that the Western leaders who took these decisions to act didn”t intend that chaos would be the result. On the contrary, they intended to replace the dictators with stable democracies. But, as Bismarck said, “Events are stronger than the plans of men.” Events escape our control.

This is what has happened in Syria. There were reasons to approve the uprising against President Assad; there were reasons to support his attempt to suppress it. Things might have been better for Syria if he had been defeated quickly; they might have been better if he had secured a quick victory. Six years later everything is worse”the war continues and nobody knows how to end it.

President Trump’s intervention this week was an expression of moral reprobation; he is offended, even wounded, by pictures of dead or dying children. The missiles he ordered launched are intended to dissuade, at the very least, Assad from using poison gas again. But unless it makes some difference to the course of the war, it’s only virtue-signaling. Hundreds and thousands of children will continue to die by other means.