Warmongers Fake It Till They Make It 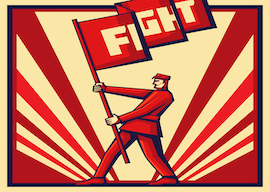 I’m starting this week’s column on a self-indulgent note. Bear with me; I have a larger point to make. But first, let’s talk about my bloated, misshapen physique. I used to be rail-thin, but about four years ago, age and my unhealthy lifestyle finally caught up with me. My hair grayed, my stomach swelled, and my chin vanished like Atlantis in a sea of cellulite.

Whenever I’d appear on a vodcast, I’d get YouTube comments asking, “Are you really David Cole? David Cole is young and svelte. You sure you’re him?”

See, a portion of my fan base knows me only from my Holocaust work—the documentaries and TV shows I did in the early 1990s. When I was a kid. Those old videos, and my appearances on programs like 60 Minutes, 48 Hours, Donahue, Morton Downey, and Montel Williams, centered around what I was infamous for back in those days: exposing fakes in the evidentiary record of the Holocaust. Fake film footage, fraudulent testimony, and, most notoriously, physical evidence that was inaccurately or deceitfully presented. It was a fun life full of international travel, speaking gigs, and the occasional assault and death warrant.

But being a gadfly is not being a historian. Far more important is the content I produced detailing my overall thesis regarding the Holocaust. Not just what didn’t happen, but what did. The what, who, when, and how of it. And while my thesis has been praised by both revisionists and anti-revisionists alike, to the fan base stuck in the ’90s, it’s a completely irrelevant detail of my work. Ninety percent of the online messages I receive reference my “debunking” activities. “Talk about when you exposed that fake gas chamber! Remember when you busted that staged ‘Nazi’ footage? Hey—do another video where you walk through a gas chamber showing the windows and doors that lock from the inside!”

I’ve written more about the Holocaust since my “outing” in 2013 than I wrote in the entire decade of the ’90s. I wrote a book on the topic. But everyone wants to talk about “fake gas chambers” and “fake footage.” It pisses me off.

Well, it used to. I recently had an epiphany, courtesy of leftists, neocons, and Syria…a revelation that made me realize that the Holocaust content I produced back in the early ’90s probably does matter more than what I’ve done since. Who the hell cares about my vaunted historical thesis? Who gives a rat’s ass about Aktion Reinhard or Wilhelm Kube or the Korherr Report or Heinz Höppner’s influence on Himmler’s 1940 anti-Bolshevist mindset? Yawn! Even Jews don’t care about such minutiae.

“If there’s anything worthy of a skeptical eye, it’s propaganda crafted with the intent of inflaming pro-war passions.”

My thesis might be 100% accurate. It might be 100% bullshit. It might be 50% of each. None of that matters compared with the fact that it’s completely irrelevant to what’s happening in the world today. But wartime propaganda fakes? That topic has relevance, because those who push for war continue to use fake footage, fake testimony, and faked physical evidence to move the gullible and stupid toward an acceptance of one new conflict, one new intervention, after another.

See, all this time I had my fans figured wrong. I pretentiously thought they were ignoring the most vital part of my oeuvre. But no, just the opposite. They were quite rightly responding to the aspect of my work that transcends one particular war and one particular atrocity.

If you want to learn about the Holocaust, great. As Emil Faber famously said, “Knowledge is good.” But if you choose not to immerse yourself in such details, it really won’t make a damn bit of difference to your life or your community.

But the manufacturing of fraudulent evidence in the service of a pro-war agenda matters. You don’t have to be a soldier, or a soldier’s family member, for wars to matter. The destabilization caused by a shitstorm like the Syrian regime-change fiasco never stays regional. So when the war-drivers use fakes and deceptions to garner popular support for their latest adventure, that’s something that should be of interest to you, no matter who you are or where you live.

Everyone should have at least some working knowledge, some awareness, of the history of wartime fakery. So as much as I hate to admit it, I was wrong to deride people for concentrating on what I considered the least important aspect of my work. And I’ll tell you the exact moment I had that epiphany: It was when ABC “News” misrepresented video of a Kentucky gun range as front-line battle footage showing innocent Kurds being obliterated in the wake of Trump’s “abandonment.” The fraud was quickly exposed (not by mainstream “media critics,” but by the gadflies who do today exactly what I was doing thirty years ago), and ABC apologized. With even Snopes acknowledging the deceit, the aforementioned critics had no choice but to act like they cared all along, as they puffed their cheeks and bellowed, “ABC owes us an explanation!” Having shown what good, conscientious media critics they are, they felt no need to actually push for an explanation. Hey—they asked. Isn’t that enough? Of course, ABC provided no explanation, and the critics happily let the unfortunate incident slide.

As an AIDS-riddled Aussie once so sagely observed, everything old is new again. In 1989, the U.S. National Archives heralded an amazing find: actual footage of a gas chamber in a Western Front Nazi concentration camp. That’ll silence those damn revisionists! The “discovery” was announced in a National Archives book titled The Holocaust, Israel, and the Jews. The footage was described as showing the “interior of a gas chamber, including handprints dug into the cement wall by the victims.” When the U.S. Holocaust Memorial Museum opened in 1993, the footage was featured as evidence of the Nazis’ extermination program.

Three days in the National Archives is all it took for me to uncover the source Signal Corps film from which the “gas chamber” footage had been extracted. In fact, the footage was actually of…ready for this?…a gun range. A Parisian firing range that had been used by the Nazis during the war to execute resistance fighters. No Jews, no gas. The “handprints dug into the cement wall” were actually bullet holes in the wall behind the posts where the condemned partisans were tied.

Two gun ranges, 75 years apart. Different culprits, different objectives, but the same con, the same fraudulent misuse of firing-range footage, and the same refusal to provide an explanation for the “error.” The war propagandists have a limited bag of tricks, so by necessity locations and themes are reused. Ah, themes. Dead kids is a huge theme. Like the footage of that “dead” Kurdish girl being cradled by her grieving mom. The footage that half of Hollywood and damn near every Democrat and neocon tweeted a few weeks ago. The footage where the dead girl blinks and moves her head—that dead Kurdish girl.

Soon enough, the war cheerleaders were forced to admit that the young girl was actually just “sick,” but same difference, right? After all, by refusing to escalate in Syria, Trump empowered the germs that felled her.

From Kuwaiti babies tossed from incubators to phony Assad poison-gas attacks, war fakes are as predictable as Magicicadas and far more destructive. So it stands to reason that anything that encourages people to be more skeptical of wartime propaganda is positive. And while most so-called professional skeptics prefer to question things like Bigfoot, UFOs, and fortune-tellers, I’d humbly point out that the death toll from wars has been a bit greater than the death toll from Bigfoots, so if there’s anything worthy of a skeptical eye, it’s propaganda crafted with the intent of inflaming pro-war passions.

To be clear, the existence of fakes in the fabric of Holocaust historiography doesn’t mean the Holocaust didn’t happen, any more than Syrian war fakes mean that Turkey’s objectives in the region are noble. It should also be pointed out that Holocaust fakes weren’t used to initiate a war. Rather, in the West, they served as an ex post facto reason for fighting once Stalin voided any possibility of Polish independence. When Eisenhower visited the newly liberated Ohrdruf camp in April ’45, he took every opportunity to exploit the images of dead and dying inmates. That Ohrdruf had opened only a little over four months prior to liberation, that it was not a “Jewish” camp, and that it had nothing to do with the Holocaust mattered not; we needed dead bodies, stat. In one of my favorite forgotten episodes of the war, Churchill personally complained to Eisenhower that the British “atrocity team” he’d dispatched to Ohrdruf to obtain dead-body photos for British use had been “hustled” out of the camp by the Americans.

Two towering Allied figures fighting over access to emaciated stiffs. That’s how important atrocity images, context be damned, were to the Western Allies, the Soviets, and the Jews. And for the latter, the fakes retained their value long after the war ended (hence the appearance of new fabrications, like the Parisian gun-range footage, well into the 1990s).

There had been wartime propaganda long before World War II, but the Holocaust fakes, some of which were intentional and others the result of wartime chaos and confusion, helped forge a template that continues to be used to this day, especially when the goal is to motivate Americans to support intervention in the name of saving persecuted minorities. I have several leftist friends who’ve forgotten all about their fanatical anti-Bushism as they bitch and moan about how Trump “abandoned” the poor waifish Kurds. These friends were so “anti-war” in 2001, they didn’t even consider 9/11 a valid reason to put boots on the ground or bombers in the air. But all of a sudden the Kurds are the new Jews, and Trump is leaving them to be gassed. All of a sudden Tulsi Gabbard is a one-woman Molotov-Ribbentrop Pact, equal parts Russian asset and genocidal Nazi.

Because look at that twitching totally not-dead dead Kurdish girl.

Watching suckers fall for such vulgar propaganda, and watching skeptics debunk it, has prompted me to make peace with the “fans” who continue to obsess over the more sensationalistic accomplishments of my youth. If I played even a small role in making people a tad less susceptible to manufactured atrocity propaganda, I’m cool with it. Every fake from long ago that’s debunked can give people a little more immunity to the fakes being employed today. Which probably explains why YouTube is pulling all of my 1990s videos and TV appearances. Up until now, YouTube pretty much left my old stuff alone. I never uploaded those ancient vids myself, but others did, and I’d occasionally note with amusement how many views they had (cumulatively, a couple million).

I’d assumed that YouTube ignored them because they regarded them as irrelevant.

It appears YouTube and I shared an epiphany. What are the odds?