Was Jesus a Pennsylvania Dutch Neocon? 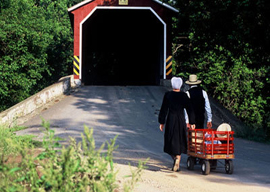 During the last five years I”ve written provocative fortnightly columns for the Lancaster newspapers, and I periodically receive letters from an outraged older woman (or so my wife has guessed from her handwriting and historical references) who considers me to be a moral leper. From this person’s communications, I”ve learned that I”m “one of those leftist professors who are poisoning the minds” of the rising generation. In her most recent letter, which arrived in my college office mail two days ago, my correspondent called me “salacious” and compared me to a lustful professor at some Western university who incites his students to sexual excesses. Usually her letters are so full of disconnected charges and indiscriminate name-calling that it is hard to relate anything to my person, but the overall message is clear: My columns have pissed off this critic big time.

Two things about her mailings allow me to determine it’s her even before I open the envelope. First, the lady never signs her name or gives her address, which causes me to think she belongs to the Pennsylvania Dutch culture in whose midst I reside. The Pennsylvania Dutch will rarely tell you anything to your face. And they love to hide behind anonymity, which they associate with Christian humility. Like other people, they hold opinions and sometimes very traditional ones. But they try hard not to show others, and certainly not outsiders, what they”re really thinking. Anonymous letters are therefore useful.

“Apparently Christ was not only Jewish in his earthly existence but also a neocon.”

This lady’s missives usually arrive in bulky envelopes crammed full of Xeroxed copies of articles from neoconservative publications, most recently a long Peter O”Rourke tirade from The Weekly Standard explaining how much better Republicans are than Democrats.

My correspondent is appalled that my views rarely coincide with what she takes to be authentic “patriotic” opinions. She extols Bill Kristol, Sean Hannity, and Bill O”Reilly as the true voices of American conservatism, but her fave is Charles Krauthammer, and in her last letter I was told that “ridiculing a man of the stature of Charles Krauthammer is proof enough of your ignorance.” She also accused me of being not only “hopeless, blind, deaf and dumb,” but downright “belligerent” for not backing the American enterprise to overthrow Gaddafi. She was particularly upset that I made fun of Sarah Palin for insisting we jump into this new war without even looking for allies. Apparently unlike me and other leftists, Sarah was saying the American thing. My anonymous correspondent heard the same view from O”Reilly on FOX and then read it in the WSJ about a day after Sarah spoke. Given all these authoritative “conservative” judgments, it seemed impudent for me to disagree”perhaps even a bit salacious.

The lady also fills her envelopes with charts showing how much of our earnings Obama is spending. She wants me to stress this issue in my columns when I”m not praising wars intended to “spread our values.” Unsurprisingly, my critic pays no attention to what the last Republican administration did to increase the federal debt, particularly by monetizing our expenses when it went to war in Iraq. All deficits, we are to imagine, start with the Dems, and I should explain this to readers lest it escape their notice.