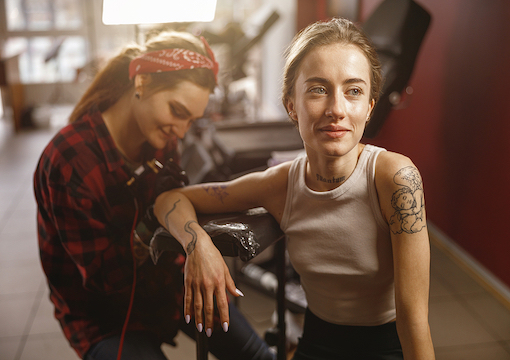 There are no sheep more ovine than those who get themselves tattooed in order to individuate themselves. Judging by the statistics, such sheeplike behavior is becoming more and more common.

I still remember the good old days when tattooing was largely, if not entirely, confined to soldiers, sailors, and marginals. I thought once of cataloguing the tattoos that I came across in the prison in which I worked. They were mainly amateur, done crudely in India ink. How many nipples did I see with Made in Britain emblazoned round them! Then there were the dotted lines round wrist and neck accompanied by a pair of scissors and the instruction Cut here. More than one person had No fear tattooed above his collar line, and one of them, a small man, had been attacked several times in the pub because of it, on one occasion suffering a fractured skull as a result.

I think I was among the first commentators to notice the ascent of tattooing up the social scale. Mediocre intellectuals began to get themselves tattooed and then elaborated rationalizations for their decision. Much of intellectual life has since become the attempt to give arcane explanations of foolishness.

“By tattooing yourself, you can enjoy the advantages of being an insider and outsider at the same time—like many a populist politician.”

My own first explanation of the phenomenon was that these mediocrities were attempting to demonstrate their political virtue by imitating the marginals, imitation being the highest form of compassion (in their view). Whether or not my explanation was ever true, it cannot now explain the rise and rise of tattooing, such that it is even more popular than antidepressants and transsexualism. Some other explanation must now be sought—not that I can claim to have found it.

Naturally, people claim to see beauty in tattoos, especially when they are fresh, and I suppose there is no disputing taste. Oddly enough, though, tattoo designs almost always correspond in taste and aesthetic sensibility to the kind of drawing and design that criminals do once they take up drawing or designing in prison.

Be this as it may, those who get themselves tattooed partake of two somewhat opposing inclinations: the first to be part of a herd and the second to imagine themselves rebellious individuals—for in an age of celebrity, everyone feels that he must stand out in some way or be radically a nobody. Despite its ascent of the social scale and the fact that it is now as common as muck, as they say in the North of England, tattooing retains its whiff of antinomianism. By tattooing yourself, therefore, you can enjoy the advantages of being an insider and outsider at the same time—like many a populist politician.

Naturally, no answer to a question such as this—why has tattooing become so popular in the past two or three decades?—is a final answer. As the Haitian peasants say, behind mountains, more mountains. If, for example, I explain the rise of tattooing by the rise of insensate self-absorption and the need to project oneself as an individual, the question then becomes how and why did this self-absorption and need arise? When one considers social questions, one is always at risk of returning to the Garden of Eden as the final explanation.

Very little is written against the modern vogue for tattooing, as if people were afraid to be declared Enemies of the People if they did so. I have seen many books written about modern tattooing, but not one (as yet) that suggests that it is other than a wonderful extension of the freedom of expression. I have heard many people say that they tattooed themselves in order to express themselves, but when asked what it is that they wanted to express—other than themselves—they became mute or incoherent. In fact, tattooing is in reality a confession of having nothing to express (except, sometimes, as identification with a group), and having nothing to express in an age of communication is felt as a wound. Better to disfigure yourself than express nothing.

A recent article in The Guardian—the house journal of the intellectual apparatchik class—by an Irish writer captures, no doubt unintentionally, the nihilism underlying the tattooing phenomenon. I know nothing of the author, who may be an excellent and estimable person in many respects. But it is surely odd that anyone should write about her tattoos in an article titled Of course tattoos are a mistake. That’s the beauty of them.

Having had herself tattooed for the nth time, she writes:

It wasn’t that I enjoyed looking at the hideous mess, but rather that I thought I would easily come to enjoy its presence in my life, even though it was a mistake. Why? Because it would have been MY mistake, something that had happened to me and only me. It would have been part of my one, unreproducible life.

There is no plumbing the egoistic shallows of this; I am reminded of the schoolteachers who told me that if they mentioned to parents that their offspring were behaving badly, they would grow angry—with the teachers, for daring to suggest that any offspring of theirs might be less than perfect. If there was anything wrong with them, it must be the teachers’ fault.

The author of the article continues:

Plenty of people, young and old, have expressed prurient disapproval of my tattoos…. Admittedly, I have not done much to avoid these criticisms, given my array of dazzlingly pointless tattoos. I have 13 of them now, and rather than an aesthetic grand plan, they form a haphazard collection of unrelated, impulsive doodles. Personally I like the casual vibe the whole nutty array gives off…my tattoos are a kind of undermining of the sanctity of my body.

The author finishes with the claim that her tattoos are some kind of memento mori, reminding her of the transience of life. It is as if no one ever thought of the transience of life before there were tattoo parlors. In its pretentious-verbiage generation, writing on the subject of tattooing, almost always in praise of it, strongly resembles the writing of architectural critics in defense of some terrible monstrosity by a psychopathic star architect.