Waxing Your Balls for Social Justice 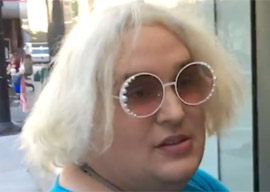 If there is a Next Wave of Transgenderism, Jonathan Yaniv is surfing its crest. He’s such an odd duck, even many trannies are distancing themselves from him.

Jonathan is his birth name, and as far as I’m aware it’s still his legal name, although he insists on being called “Jessica.” He also insists that he’s a woman, despite the fact that he still has a penis, testicles, and a deep voice. By his own admission, he has not undergone any sex-reassignment surgery…yet. To my knowledge, he only started calling himself a woman within the past few years, although he’s been fixated on very young girls and their tampons since at least 2013.

Oh, and is if all that wasn’t bad enough, he’s also Canadian.

As of July 17, Canadian reporters are no longer forbidden from publishing his name or writing about his history, although I believe they are still legally prevented from referring to him as “him.” You see, Yaniv is one of those aggressively litigious trannies who is always suing people and threatening to destroy their lives for daring to note that a person with a penis, testicles, and XY chromosomes is a man. Last year he successfully petitioned the psychotic witches’ coven known as the British Columbia Human Rights Tribunal from printing his name in all news coverage of his fruity saga—instead, journalists were forced to refer to him merely as “JY.”

Oddly—well, in the current climate it’s predictable, but until very recently on this and any other planet it would have been considered way beyond odd—social-media outlets have allowed Yaniv to badger anyone his plaque-addled heart pleases while banning anyone who criticizes him.

“Remember when trans activists and their enablers assured you that none of this would lead to unhinged sexual predators invading women’s bathrooms? They were gaslighting you.”

Yaniv sought to have publication of his name banned when he made international headlines after filing 16 human-rights complaints with the Human Rights Tribunal alleging that 16 estheticians were guilty of transphobic discrimination because they refused to wax his balls. Not being the least bit familiar with genital waxing—I prefer my ladies to look like all three members of the Jimi Hendrix Experience combined down there—apparently waxing male genitals requires an entirely different process than depilatory processes for the ladies.

Because of the way this “Human Rights Tribunal” is configured, the legal complaints cost Yaniv nothing, but each of the 16 women he targeted were required to shell out around $20-$30K to retain a lawyer to defend them or else pay a penalty of around $35K—assuming there were any lawyers willing to defend them way up yonder in Canada, where accusations of “transphobia” are a modern scarlet letter.

Many of the women he shrieked about to the Tribunal were of foreign origin, where touching a man’s balls was considered inappropriate in almost every possible scenario, possibly even marriage—one may forgive me for being unaware of whether testicle-petting is considered haram in Islam.

This carcinogenically bizarre case has led to such unintentionally hilarious headlines as “It’s not a hate crime for a woman to feel uncomfortable waxing male genitalia” and “Scrotum waxing human rights complainant calls 911 on journalist,” the latter referring to a dustup last week outside a Vancouver courtroom between Yaniv, his hyper-enabling mother, and an independent journalist with the undeniably cisgender-male name of Dan Dicks. Although Yaniv complained on Twitter that Dicks was a member of a savage group of “violent protestors,” real-world video footage shows Dicks calmly attempting to ask Yaniv a few questions as Yaniv threatens to pepper-spray him and triggers an elevator alarm while his mother snatches Dicks’s phone right out of his hand.

Screen captures of live chats Yaniv is alleged to have engaged in over the years—which he dismisses as fabrications by anti-LGBTQ hatemongers—show a nauseating fixation on little girls, especially their tampons.

Here are the lowlights of a conversation between Yaniv and a self-identified adult woman:

Woman They’re young enough that it may not bother them. Kids are more receptive than adults.

Woman A little, because kids look up to us for guidance and help. And not every girl may know what they are for….

Jessica Yaniv If she wants a tampon though, should i give her one and instruct her on how to use it?

Woman If she doesn’t know how to use it, I would find her mother. If her mother is not there then yes.

Jessica Yaniv And what would I tell her…like, would i go into the stall with her and help her? that sounds so weird.

Is it weird that it’s a fantasy of mine to go to the bathroom [with] a girl and change pads together?

If I notice a girl that’s nude below and has a tampon string coming out when I’m changing and doing my stuff, is it weird to approach her to ask her for a tampon? or pad? Just to bond with her a bit over period stuff…

Even weirder is when the fantasy translates into real-life action, as in Yaniv’s recent application for a permit to host a topless pool party with children aged 12 and over where parents are not permitted because Yaniv says he wishes to foster a “safe and inclusive” environment.

Weirder still is the story told by a certain Ashley Smith—now a 20-year-old woman—who was only 14 when Yaniv allegedly approached her online claiming to be a manager for a pop band that Smith loved. Smith claims that Yaniv told her that he accidentally clicked on a kiddie-porn link and then followed it up by asking her, “wanna see?” In another message, Yaniv tells Smith, “If you were two years older…I’d…you know…with you.”

Weirdest of all is the criminal complaint filed last week by 20-year-old Jessica Rumpel of Washington State, who was only 14—Yaniv was 27 and had yet to self-identify as a woman—alleging that he sent her sexually explicit voice messages in the voice of Sesame Street character Elmo of “Tickle Me Elmo” fame. The messages are hard to discern, but in the first few seconds it sounds to me as if Yaniv is saying, “Elmo loves to fuck!…Elmo loves some dickie!”

According to Ms. Rumpel:

Remember when trans activists and their enablers assured you that none of this would lead to perverts invading women’s bathrooms? They were gaslighting you.