We, Too, Can Be a Failed Latin American State 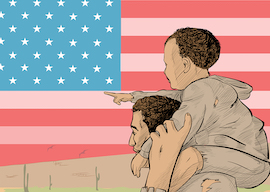 The left’s enthusiasm for Third World immigrants isn’t only because they vote 8-2 for the Democrats. It’s that Latin American peasants seem uniquely amenable to idiotic socialist schemes.

You probably think it’s beyond silliness for Bernie Sanders and Elizabeth Warren to keep promising FREE HEALTH CARE FOR ALL! NO PREMIUMS! NO CO-PAYS! ILLEGAL ALIENS, TOO! EVERYBODY GETS A PONY!

No one could be gullible enough to fall for that.

I refer you to the economic powerhouse that is Latin America.

Based on hundreds of years of indigenous people voting for politicians who made similar promises, Latin America has become the dream factory that it is today. That’s why Tegucigalpa is practically a byword for “technological innovation,” Santiago was the picture of calm sophistication this weekend, and Caracas is the ultimate in modern conveniences.

Perhaps you missed the article in last Saturday’s New York Times on what socialism has done for the water system in Venezuela:

The brick shack on the outskirts of Venezuela’s capital is crowded with tubs, jugs and buckets. The water they hold must last the family of eight for a week — but it’s not enough for frequent washing or flushing, so the kitchen is filled with greasy pots and the house smells of stale urine.

And none of the water is treated, making diarrhea and vomit a regular occurrence.

‘We practically live in the bathroom,’ said the mother of the family … [Her daughter] sat nearby, pale and listless, recovering from her latest bout of diarrhea just one month away from childbirth.

Democrats: We need some of that Latin American magic!

“Everywhere in the world, the working class loves socialism — except the U.S.A.”

Twenty years ago, 60 percent of Venezuelans had regular access to safe drinking water. Today, only 30 percent do.

How did this happen?

Answer: Poor Venezuelans voted for it. If we let them in, they’ll vote for it here, too. (Except 20 percent, who will be patriotic Americans, i.e. Republicans.)

That’s great news for Sanders and Warren! But it’s terrible news for the country.

Denouncing “squalid oligarchs,” Hugo Chavez promised Venezuela’s poor: “I will not rest until every human being who lives in this land has housing, employment and some way to manage his life.”

The poor were sold! In December 1998, Chavez was elected in a landslide, commemorated with this Seattle Times headline:

As The Miami Herald explained, Chavez “crystallized anger and frustration among Latin America’s poor at free-market policies that have brought only limited prosperity.”

What did free markets and private property ever do for the poor? If they were poor, but others were rich, the “squalid oligarchs” must have stolen from them! (Elizabeth Warren should borrow that epithet. “Wealthy corporations” is getting old.)

Bernie says he “wrote the damn bill” to give Medicare to all, but he was plagiarizing Chavez, who immediately implemented a “single-payer” system for health care in Venezuela. He set up free health clinics, opened military hospitals to the poor and deployed tens of thousands of government workers to deliver medical services to the barrios.

At Chavez’s invitation, thousands of poor people took up residence in hotels, warehouses and luxurious golf courses. As one of the squatters explained, “We just want a home for our children.” That could be the epitaph of every once-great country: It was for THE CHILDREN!

As you may have heard, this worked out fantastically well. Within a year of Chavez taking office, the economy had shrunk by 7.2 percent and unemployment was at 20 percent. A decade into this socialist paradise, the poor were poorer than ever. There were constant blackouts, food shortages and appalling infant mortality rates. (Much like what we’re seeing in California.)

Venezuela’s infant mortality from diarrhea alone has sextupled in the past 15 years, according to the World Health Organization. (That’s an estimate, on account of Chavez’s quick response to the crisis, which was to stop releasing public health data.)

Potable water, that most basic element of civilization, is virtually nonexistent. Today, sitting on top of the largest oil reserves in the world, Venezuelans are starving.

Chavez didn’t seize power in a military coup. There was no revolution. He wasn’t imposed on Venezuelans by the C.I.A.
He was the people’s choice, elected president in 1998 (with 56 percent of the vote), then re-elected in 2000 (60 percent), then again in 2006 (63 percent) and yet again in 2012 (54 percent). And that’s not counting all the regional, parliamentary, constitutional and referenda elections his party won, over and over and over again.

Like that other Latin American matinee idol, Eva Peron, Chavez destroyed a country by offering the poor pie-in-the-sky promises that were to be paid for by “the rich.” In both cases, it took only about a decade to turn two of the wealthiest countries in the world into two of the most dysfunctional.

All of this would be of limited interest outside of psychological circles, except for the fact that these voluntary hellholes are adjacent to our country, which is why our southern border is always besieged with desperate Latin Americans.

They’re fleeing the very systems that they voted for, and which (80 percent) would willingly vote for again.

The key point is this: Everywhere in the world, the working class loves socialism — except the U.S.A. To the dismay of American liberals, their movement has always been bereft of the very proletariat that they claim to champion. Instead of truck drivers and longshoremen, Democratic meetings are full of divorcees, transgenders, vegans and college professors.

Recall that when student radicals tried to organize blue-collar workers in the ’60s, they ended up getting their heads smashed by building trades guys for protesting the war. Today, America’s working class wears a MAGA hat.

That’s why the Democrats are dying to fling open our southern border. As Lenin might have said, you can’t make an omelet without bringing in millions of poverty-stricken Latin Americans.