We Don”t Need Another Antihero 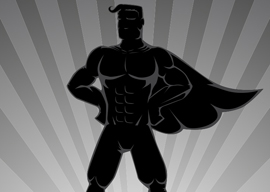 “We don”t need another hero,” sang Tina Turner in an otherwise forgettable Mad Max franchise outing. The 1985 song was a hit for reasons I”ll never fathom. Like the worst James Bond themes, it awkwardly squeezes the movie’s bombastic title into the lyrics, so the word “Thunderdome””like “Thunderball””feels like a stone in your shoe (in your ear).

It’s a dirge that was clearly meant to be an anthem, a collapsed musical soufflÃ©.

Most mysteriously in terms of its appeal, though, is the sentiment expressed. If Joseph Campbell is to be believed”and the jury is hung, in academe if not in Hollywood”an aversion to heroes is downright inhuman. “Antihero” is the laziest of misnomers; hell, that type is the one we love best.

Turner’s song topped the charts around the time heroes and victims reversed polarities, a late-20th-century phenomenon I”ve written about here before.

But is our generation really so desperate for a good old-fashioned champion that we”ll glom onto the first halfway likely looking prospect who wanders into view?

“America is Blanche DuBois running into a black man’s arms and muttering something about “the kindness of strangers” on her way to the asylum.”

The elevation of Cleveland’s Charles Ramsey to overnight secular sainthood indicates that we are.

By “we,” I don”t mean me. I woke up last Tuesday morning to learn”from every website and news channel”that a (black) neighbor had “rescued” three young (white) women who”d been held captive for years in the (Puerto Rican’s) house next door.

Like millions of others, I watched the instant-classic interview a local reporter conducted with Mr. Ramsey, the hero of the hour (and subsequent thirty-six or so).

Yes, Ramsey was energetic, earthy, and funny. Of all his quotable remarks, I most enjoyed the one that many news aggregators pretended they hadn”t heard:

I knew something was wrong when a little pretty white girl ran into a black man’s arms.

African-American columnist Larry Elder noticed the same thing and got off a joke I”m jealous of:

But a check of The New York Times, The Washington Post and The Cleveland Plain Dealer shows that while the papers quoted Ramsey, none saw fit to include his observation that “a pretty white girl” running up to a black man means “something is wrong here.” Looking uncomfortable, the television reporter, from local Channel 5, an ABC affiliate, promptly broke off the interview. No follow up, as in, “What, you’ve never seen a Shirley Temple movie?”

Yet unlike pretty much every website I visited”left and right”I didn”t anoint Charles Ramsey the new Lindbergh, or post his video on my blog, or his “amazing” 911 call, or any of the other “incredible” interviews he’s conducted since.

First off: The mainstream media hasn”t gotten a breaking story right since Walter Cronkite correctly reported that three shots had been fired on JFK’s motorcade. Reporters” twisted compulsion to transform ordinary people into instant international heroes (or, in the heartbreaking case of Richard Jewell, villains) has, ironically, cost folks their lives.

Secondly: What’s so heroic about kicking down a door (which Ramsey may not have even done) after hearing screaming behind it? The Searchers this sure as hell ain”t. Hell, it’s barely Taxi Driver.

Don”t get me wrong. I wasn”t among the white liberals who scolded their fellows for viralizing the Ramsey video and thereby supposedly perpetuating stereotypes about lower-class urban blacks as hyper, chatty clowns.