We Have Nothing to Fear but the Manosphere Itself 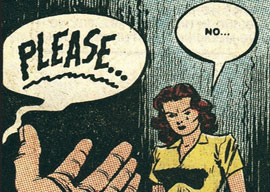 Women, beware: There’s a new emerging threat online. This week two journalists whose prior experience includes folding T-shirts at Abercrombie & Fitch and writing celebrity profiles of Demi Lovato discovered the manosphere lurking in the darkest recesses of the Internet. 20/20 has partnered with the Southern Poverty Law Center to expose this nefarious menace befouling the information superhighway as we speak.

For anyone not hip to the latest and greatest online ideological developments, the manosphere is a place for…well, men, if you need that spelled out. Other than that, not a hell of a lot holds it together. On the one hand, there’s the men’s-rights crowd, who occasionally make a salient point or two but mostly come off as a bizarre inversion of feminism. (Protip: Real men don’t complain, they drink Scotch until they can’t feel feelings anymore.) The other side consists of gamers and pickup artists, a far younger, far more attractive wing that revolves around having lots of random sex and mocking fat women on Twitter.

Like most things progressives hate, the manosphere asks difficult questions (“If feminism is so concerned with inequality, why isn’t it trying to get more women dying of workplace injuries?”) and poses uncomfortable truths. (“Men who act like belligerent assholes probably do get laid a lot more than men who show up with a dozen long stem roses on the first date.”) ABC, doing their due diligence and sticking to only the strictest of journalistic ethics, went ahead and interviewed a whopping two manosphere bloggers, which, to be fair, did provide a rough cross section of the movement.

Paul Elam runs A Voice for Men. Think of it as a sort of Huffington Post for the men’s-rights wing of the manosphere. He’s soft-spoken but an obviously passionate and downright avuncular man who shows remarkable patience and answers pretty basic questions that anyone who has read the Wikipedia entry on the men’s-rights movement knows the boilerplate answer to. (“Why is marriage unsafe for men?” asks Elizabeth Vargas, furrowing her brow, waggling her face, and doing her best to simultaneously channel confusion, boredom, and moral indignation.)

Roosh V, who sadly did not make the teaser article posted on ABC.com but may or may not appear in the actual segment if and when it ever actually airs, is known for his personal website, his “bang guides” (country-by-country manuals on how to seal the deal wherever you might find yourself), and Return of Kings, the website that brought us Fat Shaming Week, which is pretty much exactly what it sounds like.

If Roosh somehow manages to actually get screen time there’s going to be feminist teeth gnashing o’er the land the likes of which hasn’t been seen since…the last couple of weeks or so. It doesn’t take much to get them going, really. But Roosh is just the type of guy that sends the “gender as total social construction” crowd into a furious, white-hot rage. If Elam is your patient but wounded uncle, Roosh is the unrepentant rascal your wife prefers you not hang out with.

Still, even when wallowing in juvenilia (and there’s no shortage of that…boys will be boys, after all), the men’s-rights wing of the manosphere is distinguished by a class and refinement totally missing from the shrieking hysteria of modern feminist blogging, whose arguments, such as they are, often entail little more than “HOW DO PEOPLE LIKE THIS EVEN EXIST?” or “WOW. JUST WOW.”