We Just Lost Another Junkie 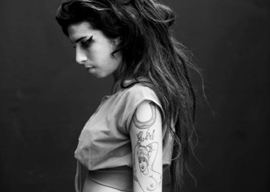 I hate when a famous junkie dies and we get empty gestures like, “We just lost a legend the likes of which we will never see again.” Why not say, “That cute English girl who became the personification of a walking mess took the whole thing too far and apparently OD’d on a cocktail of cocaine, ecstasy, heroin, and ketamine”? When celebrity roast-master Greg Giraldo died, all the Tweets were along the order of, “Greg was and will always be a legend RIP.” Nobody said, “Greg Giraldo just OD’d on Xanax and booze at the age of 44,” because that would be rude. Xanax is a heavy downer and when mixed with alcohol it can easily induce a coma, as it did with Greg. That side of the story is a little more important than remembering what a great guy he was, because it can save lives. Junkies aren’t as concerned about honoring the dead. I knew junkies in Vancouver who, upon hearing someone OD’d, would scramble for the phone trying to find out who the guy’s dealer was because if people are overdosing, it must be some good shit.

Heroin addiction isn’t a disease, as Russell Brand so despondently put it. It’s an indulgence—like obesity, but in reverse. Russell says we need to stop treating junkies like criminals and treat them “as sick people in need of care.” But England already treats them like sick people, with little success. In Scotland, that approach has fallen flat on its face like a junkie on the nod.

Drug addicts don’t need kid gloves. They need an iron fist. I know this because I’ve watched a dozen heroin addicts die over the years, and the ones who survived always say the same thing: “I can’t believe you didn’t just punch me in the face.”

If you know a drug addict, there will be that moment when they say they’ll call you back and then they don’t. Then you call them, but there’s no answer. What do you do? I’ll tell you what you do: nothing. If you charge over there and kick their door down to make sure they’re OK, you will have tagged yourself as a mark. The junkie then knows you can be relied on to help him get out of trouble, AKA loan him money. They will lie to your face and steal from you like common politicians because the drug has taken over their brain like a parasite. I’ve known junkies who committed crimes even when they knew they were going to get caught because, as one put it, “I didn’t care. I was so junk-sick, all I cared about was getting money to get high right now. What happened ten minutes later was totally irrelevant.” What happened ten minutes later? He went to jail.