We Need to Talk About Quebec 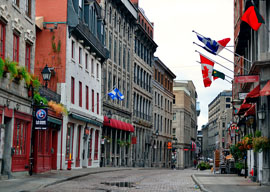 Americans left and right are, understandably, only interested in “Canadian initiatives,” (“worthwhile” or otherwise) when these can be whittled into pointed sticks with which to poke their domestic opponents.

So ever since Trump’s election, U.S. “progressives” have turned their red, watery eyes north of the 49th parallel for psychological succor. PM Justin Trudeau quickly positioned himself as the West’s left-wing leader-in-exile, declaring, among other risibilities, that individuals affected by the president’s “Muslim ban” were welcome to come to Canada instead.

(Funny, I”ve been inconvenienced at airports for over 15 years thanks to a bunch of Muslim immigrants. Yet Muslim immigrants suddenly being inconvenienced at airports for 15 hours is evidently Holocaust 2: Electric Boogaloo. P.S. If Muslims are “the new Jews,” why are they are so eager to flee into a nation their infidel enablers insist is ruled by “Hitler” and overrun by “Nazis”…?)

Anyhow, lots of us who already live in Canada weren”t pleased about the Hair Apparent’s open-door edict, especially since Trudeau’s well-documented affection for Islam and its dubious “refugees” isn”t tempered by even a feigned concern about legitimate Christian and Yazidi ones.

Then came the despicable slaughter of six men praying in a Quebec City mosque on Jan. 29.

“The Great Shutting Up is only getting started.”

Behold, the same Trudeau who couldn”t bring himself to employ similar rhetoric after Muslims murdered Canadian soldiers on Canadian soil (then, in one case, stormed Parliament itself) rapidly denounced this massacre as “a terrorist attack,” even adding an Obamaian “make no mistake” flourish.

And faster than you can say “AmeriKKKa sucks,” no less than “the New York Times editorial board” trumpeted, “Quebec’s Response to Hate: More Tolerance.” The Grey Lady’s remaining readers were somberly informed that “[t]olerance is a proud theme in Canadian identity” and “[n]ow Canadians were wondering how this could have happened, and what it means.”

True, except some of us doing the “wondering” are being ordered, by our fellow “tolerant” Canadians, to cut it out.

No, I”m not talking about the ever-changing official story. It pains me to write that “unanswered questions remain“ because “troother” freaks have been buzzing around this crime like flies on shit.

Yes, initial eyewitness reports placed a second gunman at the scene, but so have bystanders going back to JFK’s assassination. One day, the sliver of the brain responsible for generating this optical illusion will be named for its discoverer; until then, all “second gunmen” should be considered imaginary until proven otherwise.

Another disappeared “fact“? These “gunmen” allegedly shouted “Allahu akbar.” And yes, those are the last words millions of infidels have heard before being killed by Muslims”but I suspect they”re often the last words uttered by pious Muslims before their own deaths, too.

So what of the sole shooter, Alexandre Bissonnette?

Well, he looks like they all do lately, doesn”t he? Twenty-seven going on 17; another spindly beta male, as white as the KKK sheets of every leftist’s fever dreams.

Indeed, the CBC declared, with unconcealed glee, that “white, Christian men are Canada’s mass shooters””an easily debunkable exaggeration, albeit a slander I was forced to subsidize with my extorted tax dollars.

The media (both social and mainstream) can”t stop crowing that Bissonnette “liked” Trump and Marine Le Pen on Facebook”ignoring his “likes” of the Pope, Canada’s socialist and separatist parties, Tom Hanks, Sprite, and Mr. Bean.

All that being said, I regret to say that, for once, we right-wingers appear to be soundly stuck with this doofus being “one of us.”

Well, sort of. Because there’s another “identity politics” facet to this story that most Americans are blessedly ignorant of, unless they read the word-perfect guest column by Canadian writer and artist J.J. McCullough that just appeared in The Washington Post.

Ticking them off one by one, from the infamous “Montreal Massacre“ to lesser-known (to non-Canadians) incidents, McCullough writes, “[M]y lifetime has overlapped with at least one spectacular act of Quebec public violence every five years or so. No other province can claim the same.”

I”m married to a Quebecker, albeit an Anglo (but with a French surname”but, as his Ancestry DNA results revealed, no French blood, thank you, God). And he and I and my friends were all talking about that very thing the day after the murders:

What the hell is wrong with Quebec?

That is, on top of all the other stuff that’s already wrong with Quebec: the supremacist arrogance, the extortion”stick French on everything and pay us trillions of dollars, or we”ll turn back into the Canadian IRA“its “dark history of anti-Semitism, religious bigotry and pro-fascist sentiment,” as McCullough writes in his catalog of the not-so-Belle Province’s multitude of sins.

Which, in true dysfunctional-family form, no one is allowed to talk about.