We, the Unhyphenated Americans: Meet My People 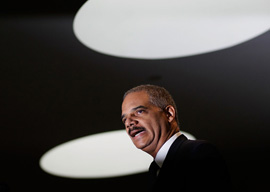 My fellow Americans, who are “your people”? I ask because U.S. Attorney General Eric Holder, who is black, used the phrase “my people” in congressional testimony this week. It was an unmistakably color-coded and exclusionary reference intended to deflect criticism of the Obama Justice Department’s selective enforcement policies. It backfired.

In pandering to skin-deep identity politics and exacerbating race-consciousness, Holder has given the rest of us a golden opportunity to stand up, identify “our people” and show the liberal poseurs what post-racialism really looks like.

Herman Cain is my people. He’s my brother-in-arms. I’ve never met him. But we are family. We are kin because we are unhyphenated Americans who are comfortable in the black, brown and yellow skin we are in. We are growing in numbers—on college campuses, in elected office, on the Internet, on public airwaves, everywhere. And that drives liberals mouth-frothing crazy.

Cain is the successful Georgia businessman who has wowed audiences across the country with his passion for free markets, free minds and the American Dream. The former president of Godfather’s Pizza and forceful tea party speaker happens to be black. So he must pay the price that all minority conservatives in public life must pay. As I noted last week, a cowardly liberal writer recently derided Cain as a “monkey in the window,” a “garbage pail kid” and a “minstrel” who performs for his “masters.”

Race traitors. Whores. Sellouts. House Niggas. Self-haters. I’ve heard it for nearly 20 years in public life. Every outspoken minority conservative has. Sticks and stones may break our bones, but these spiteful epithets can’t enslave us.

Val Prieto is my people. A fierce, freedom-loving American blogger of Cuban descent, he rejects race-card games and refuses to be lumped in with Hispanic ethnic grievance-mongers. In response to pro-illegal immigration marchers who infamously desecrated the American flag, Prieto wrote:

“I have never and will never, despite having many issues with the government of the United States throughout the years, burn a flag of the United States of America. I am Cuban by birth, American by the grace of God. And a darned proud, dignified, thankful and respectful American. … I refuse to be lumped together as a class or a race simply because we speak a similar language. … I ain’t Mexican, I ain’t Latino and I ain’t Hispanic. I am an American of Cuban descent. And damned proud of it.”