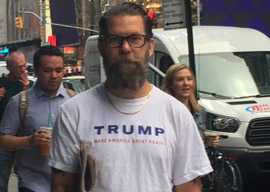 Wearing a Trump shirt in Florida is like wearing a Rolling Stones shirt at a Rolling Stones concert. In cities such as Berkeley, Madison, or Portland, however, it’s like wearing an M16 covered in dead babies of color. Liberals have built The Donald up to such a ridiculous straw man of pure villainy, showing support for him is worse than throwing acid in someone’s face. New York Times editorial writer Brent Staples recently asked, “What planet do they come from, these people who argue that a totalitarian, white supremacist government would [be] good for democracy….” New York is an interesting city to support Trump in because although it hasn”t voted for a Republican president since Coolidge, there are still plenty of hardscrabble blue collars who don”t fit Cruz’s “New York values“ stereotype. Within only a couple of miles you can go from retired cops to mobsters to third-generation welfare Puerto Ricans to middle-class hipsters to Wall Street billionaires. The blacks in Harlem think the blacks in Brooklyn are lazy losers who wear outdated jeans. It’s called a melting pot, but it’s really several dozen totally distinct cultures that manage to coexist without saying a word to each other, ever. I”d be surprised if even one Upper East Side Jew has ever met a Hasidic Jew from Williamsburg.

That’s where I started my journey. I wore a “Make America Great Again” hat and shirt to a hipster bar called Nitehawk in Williamsburg, Brooklyn. The venue doubles as a movie theater and is in the epicenter of a cool-kid enclave that has become so yuppified, the real estate is now more expensive than Manhattan’s. I noticed some smiles as I sat down at the bar, and people nodded their heads and even raised the occasional glass. I said, “Thanks” and was pleasantly surprised, until I realized they assumed I was being ironic. “Where did you get that?” asked one grinning millennial on a date. I said, “The website,” and my new friend glared at me with a confused face. “You support Trump?” he asked, on the off chance I was serious. “I most certainly do,” I responded. He laughed and faced the bar, deciding it wasn”t worth his time to try to figure out how serious I was. This happened several times throughout the night, with people smiling, then looking confused, then giving up.

“They want to rail against the patriarchy, unless of course it has a problem with that, in which case, well, uh, nothing, sorry.”

The next day I was still in the neighborhood (I”m selling my place there) and could walk down the street with the shameless glory only the morning sun can provide. Williamsburg doesn”t get busy until around 11 a.m., but the few stragglers walking to work or home alone from a one-night stand were not like their peers from last night. I thought I”d get sneers, but what I got”almost without exception”was capitulation. When people looked at me, I”d happily return their gaze and they”d inevitably face the ground. They didn”t look disappointed. They looked cowed. This is what I”ve always suspected. They don”t want to smash the patriarchy. They want to rail against the patriarchy, unless of course it has a problem with that, in which case, well, uh, nothing, sorry. Jared Taylor discovered this phenomenon after chasing down a necklace snatcher in New York City many years ago.

[The thief] then did something that saved him from a terrific beating. He went completely limp. He laid his head back on the sidewalk, stretched out his throat, put his hands up by his head, and opened them wide. He was holding a gold-colored necklace, which he let me take without the slightest resistance.

It feels great wearing this shirt around liberals, and it’s not just because they”re offended. Wearing a photorealistic shirt of a vagina would offend old ladies, but that would feel needlessly intrusive. This is more like being on the winning team. When Tampa Bay won the Super Bowl back in 2003, I was hanging out with a New Yorker from Tampa and he was wearing the Buccaneers jersey. He was fighting anyone who had a problem and doing shots and picking up girls like he owned the world. During a break in the festivities he came up to me holding the front of his shirt out and said, “I feel like a superhero.” I finally understand what he was talking about.

I got on the train and headed to Manhattan. About a tenth of the people I walked by had a reaction, but that’s quite a few in a city of 8 million. Two young Arabs on the train sneered at me and gave a patronizing smirk. They knew I was serious, and the laugh wasn”t ironic. It was meant to say, “You”re not even worth my time, you racist piece of garbage.” I stared back expressionless to see where it would go and they continued their conversation with an intermittent eye roll in my direction.

I exited the train on 42nd Street, where tourists outnumber locals and many probably don”t even know who Trump is (geriatric Russians took the above pic). Native New Yorkers in this area are mostly workaholics in suits, and I got friendly gestures from the men and the odd glance from the women. I might have detected a faint hue of lust from the women, but that’s likely wishful thinking. You don”t see this shirt in Manhattan very often. Outside of people I know, I don”t think I”ve seen it once. I noticed cops staring extra long. I think they were surprised that someone with a hipster beard and big glasses was on their side. Construction workers would smile and sometimes nod. This is why so many New Yorkers were offended by Cruz’s comment. We hate the New Yorker New Yorkers just as much as the rest of you.

In my office building, I am constantly surrounded by big-nosed Semites. My building is mostly fashion-industry people, or as they are known locally, “Schmatta Jews.” As I entered the elevator, one man stared at me like I just took a shit on his shoes, while the man he was with blurted out a dismissive guffaw to accentuate his stare. This prompted a response so I said, “Gentlemen,” and they continued to look at me so intently I had to double-check I wasn”t wearing a Hitler shirt. Why do Jews hate Trump so much? His daughter is likely more Jewish than the men on that elevator will ever be. I kvetched about this to Trump adviser Richard Schwartz and he agreed that it makes absolutely no sense. He said Jews want to be free to make money without being hassled by bureaucracy and Trump is the perfect candidate to facilitate that. The fact that they are so concerned with anti-Muslim rhetoric is downright suicidal.