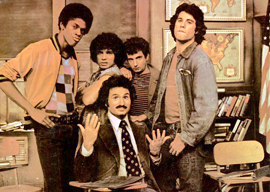 There are really two New Yorks. There’s the one Giuliani cleaned up where you can walk around Times Square all night without running into so much as a jaywalker. Then there’s East New York, the place all the criminals went when they were kicked out of the first New York.

While private-school kids” parents sit in Central Park and discuss what to do about public education, there are a few weathered tough guys who are actually in the trenches with the Worst Cubed. “Mr. T” (as his students call him) is one such guy. He’s a stocky Jewish teacher who knows what these troubled youth need because he used to be one”at the same high school, no less.

After graduating in 1988, T moved to the Midwest and eventually got a post-graduate degree in communications. Soon after, he got a good job in TV production just outside of Los Angeles but “felt like I was wasting my life,” as he puts it. His alma mater welcomed him back to teach ten years ago, and he’s determined to spend another twenty years helping teenagers who make Mr. Kotter’s Sweathogs look like Japanese choirboys.

Gavin McInnes: What the hell are you doing?

You”ve devoted your life to dealing with the lowest of the low.

I don”t appreciate that, seriously. For the record, I love my job and these kids to me are like my family. In fact, I end up spending more time with them than my own family. How many jobs are like that?

Yeah, but you get summers off. Nobody in the real world takes two months off.

So what would you suggest? Kids go to school all year round, or every year teachers find a job that lasts two months?

Bro, you can pay me what you want if I get my summers to myself. I wasn”t complaining.

Yeah, but most do. I think public schools are in trouble because teachers are too pampered. It’s so hard to fire them. They feel immune and therefore have no incentive.

Well, I have nothing but incentive, but if you want to talk about teachers overall, I think you”re right about what but wrong about why. The real problem with most teachers, at least out here, is they don”t “get” the kids. They don”t speak the language.

We had some guy here from India and he saw the wages and the holidays and thought this was going to be a piece of cake. He shows up with this bright yellow-and-orange-checkered suit ready to teach math, and the kids just ate him alive. He was gone in six months. We actually took bets, and I lost because I didn”t think he”d make it that long.

You take bets on who is going to last?

It’s not an easy job. Especially if you”re not from here.

Your Brooklyn accent has to help.

Yeah, but even I”m foreign to them because I”m white. One student asked me, “When you leave here, do you go to Starbucks and eat tofu?” He wasn”t kidding.

Your class is all black?

Yeah, and they”re just not exposed to stuff. I personally believe that kind of isolation is what leads to crime and other problems. It’s like growing up outside a coal mine when everybody in your family is a miner.

“The real problem with most teachers, at least out here, is they don”t “get” the kids. They don”t speak the language.”

What I try to do is expose them to all kinds of different stuff. I even bring in weird food like tabbouleh and make them eat Chinese food with chopsticks. I”ve brought in a Vietnam vet to talk to them and a classical musician….I brought a neurologist who defected from Czechoslovakia. The more curious I can make them about the outside world, the less likely they are to fall into the same old patterns.

There must be a lot of fights.

What’s interesting about the fights is, nine times out of ten, it’s the girls. I don”t know why. Maybe guys have higher stakes, but you very rarely see two male students throw down.

Usually they start because of a “stank look.” The girls will exchange some insults until one decides it’s time to “get it poppin”,” as they say. I look for the signs. When a girl takes the earrings off and puts Vaseline on her face, it’s about to get into weave-pulling and screaming”a full-on multi-student brawl. I have to move in the second I see the earrings come off.