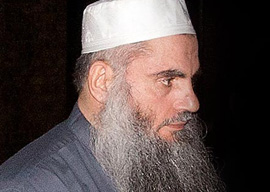 While British troops gallantly and pointlessly put themselves in peril’s way in Afghanistan, Iraq, and soon perhaps elsewhere, they must find great comfort knowing that back in Blighty, Abu Qatada (AKA “Osama bin Laden’s right-hand man in Europe”) is settling into a nice new home thanks to the kindly British taxpayer.

According to Qatada’s brother, the paunchy preacher is “the happiest man in England” and his wife and their five mini-Qatadas are “delighted” with the move to more commodious accommodations. Here the distinguished theologian lives life in the fast lane, “reading Islamic texts and watching Islamic TV channels” while musing on interfaith dialogue.

Wembley must be an improvement on Long Lartin Prison, where Qatada spent six-and-a-half years for links to sundry sanguinary monomaniacs until he was released in February. It is probably also an improvement on the Amman suburb our hero fled in 1993 in favor of Londonistan. He claimed he had been tortured in Jordan and was consequently granted asylum. Full of gratitude, he quickly involved himself in the most hardline variants of Islam then available, and his scholarly advice was soon being sought by such earnest truth-seekers as shoe-bomber Richard Reid.

“The postwar left’s raison d”Ãªtre has been to make extravagantly unaffordable promises to anyone, then shriek like banshees whenever an adult points out how feckless they”ve been.”

In a series of equally well-reasoned judgments, he generously granted permission for apostates” families to be eliminated, solicited money for Chechen militants, called for suicide attacks against Jews and Western soldiers, and generally insinuated his way into the small hearts and smaller minds of those who would become the 9/11 perpetrators. In 2001 he was placed in prison under new powers. This being ruled unlawful, he was placed under house arrest but was then rearrested and threatened with extradition to Jordan, where old friends are missing him. Thus began the present ping-pong against extradition, during all of which time he and his family have been subsidized by the same state whose soldiers he regards with such disfavor.

It is not yet known how much rent we pay for the great intellectual’s new accommodation, but the smaller house he just quit cost about £1,900 per month. And he cannot earn a living because, as his brother says, “there is so much hatred against him in England.” (Fancy that!) There are also food stamps, energy bills, child benefits, and healthcare if any of the precious pets gets paper cuts. These are added to the legal costs and the policing costs (the latter £100,000 a week). It would make sense to take the Italian approach in such matters.

Qatada is only one example of an unassimilable arriver whose pride, while fierce, is nevertheless flexible enough to allow him to accept infidel money. There is also Old Butterhooks, Abu Hamza, who according to one estimate has cost Britain £2.75 million in welfare and other costs. Then there is saintly Omar Bakri, who has managed to accrue an impressive £250,000 in handouts, and his chum Abu Waleed, who has it all worked out:

Obviously you want to make sure you walk with a limp when you leave the house just in case someone’s taking pictures.

Cases such as these give the phrase “benefits of immigration” an interesting new meaning. They must also make Britain’s war-weary soldiers ask whether the land they represent is fitter for zeros than for heroes.