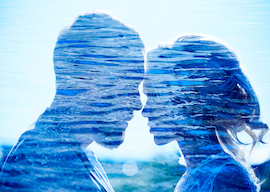 Okay, chaps, keep your hands where people can see them, and don’t touch. And try not to look. Soon that too will be a crime, so keep your eyes on the ground and you’ll be fine. The other thing to stay away from is due process. It does not exist and don’t try to exploit it. It’s a male invention intended to shield men. Put this in your thick skull: You are presumed guilty when the accuser is female, especially an American female. Now shut up, keep your head down, and go to work.

Joe Biden is no stranger to Brits; he was caught red-handed plagiarizing a Neil Kinnock speech a long time ago, but he apologized and everything was forgiven. Now he’s in trouble again for giving a lady a friendly pat on the shoulders, but after apologizing again, he’ll be fine and will be running for president. Keep your hands to yourself, Joe, this is the #MeToo era.

So far I’ve been lucky, and it helps that I am not a tactile person and respect other people’s personal space. Not that I’m a saint. Long ago, when I was young, pulling a girl’s bottom half of her bathing suit while she was going up the rope ladder of my boat after a swim was de rigueur. Screams and laughter followed each and every time. No one ever complained, but then none of us ever pulled down a very unattractive woman’s bikini.

“Keep your hands to yourself, Joe, this is the #MeToo era.”

Times change. We’re all Harvey Weinsteins now, and boats no longer have ladders a girl can climb up, but platforms that she can gingerly step onto and be elevated to the camel driver waiting above. Oh yes, and another thing. A new tenet has it that it’s better that ten innocents suffer than one guilty bum escapes. As I said, things change, and if memory serves, it used to be the other way round. Never mind. This summer on the sailing boat—and Puritan has a rope ladder—even if Jennifer Lawrence by some chance is swimming nearby and asks to come on board, I swear on the prophet’s head I will not pull down her bikini while she struggles upwards. There, finished, basta!

The intimate space of people, especially those of the fair sex persuasion, is sacrosanct. And should be. Hugs and kisses and embraces are considered very cool these days, especially in the home of the depraved and land of the frightened, yet inappropriate contact has gained ground and the need for consent has grown exponentially. The reason for all this unnecessary hugging is because scientists in Hollywood have discovered what a powerful bonding mechanism such communication can be. A hug turns a macho swagger into a gruff paternal manner quicker than you can say “Harvey Weinstein.” You rip up a contract that you regret signing, hug the guy or girl to death, and presto, all’s forgiven. You spread a rumor that a certain person has stolen millions, and has also murdered his widowed mother for money, then start hugging nonstop, and ditto. Now all this nice clinging and begging is about to become as redundant as good manners or jackets and ties. Touching and stroking and all sorts of other tricks used to help seduction. That’s all finito now, thanks to #MeToo. I suppose for us few heterosexuals left in this world we shall all have to revert to Jewish foreplay: twenty minutes of begging. Or the Cinco Latinos, as masturbation is called in South America.

Oy vey! And speaking of Latinos, in places like Argentina and Peru, strangers are allowed to plow into one’s intimate space. Many South Americans, and certainly Mexicans, all sleep together in a bed. Biden should have used that as a defense and worn a sombrero. And, incidentally, did you know that an embrace from the right person is more powerful than words in relieving anxiety? (It took years of scientific research to establish this. I knew it in a jiffy when I was 12 years old and a girl called Marina kissed me and relieved me of anxiety until I got randy five minutes later.)

So, to recapitulate: Men should not go around touching women without the latter’s invitation to do so, and certainly should not follow the 45th American president’s example of “grabbing them by the pussy.” As a graduate of sex studies and as a disciple of Dr. Klinghoffer of Vienna, I can assure you that once you have established a relationship of trust with a woman, a pat on the shoulder should get you two to ten in an American court of law, whereas grabbing her by the pussy will be seen as somewhat fluid. You’ll most likely get off with a fine, if that.

Finally, and this is Professor Taki’s advice to women, and as it so happens, also my closing remarks to the “Sex and Its Aftermath” speech I gave in Vienna recently: Pats on the backside dished out by nonagenarians in wheelchairs—as was the case of President George H.W. Bush—should not be accepted. Over-90-year-old men are dirty old men, especially those in wheelchairs. They take advantage of their lower standing and grab women by the you-know-what. They are no better than Harvey Weinstein and they’re cripples to boot. Hit them while they’re down and keep hitting them. Then send them to jail.