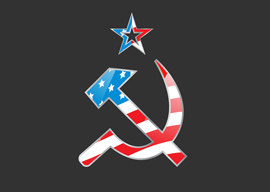 Apparently, I’m not controversial enough. So get your teeth into this: Communism did some good. Not the starvation, massacres, and bad plumbing. Nor the chronically dysfunctional art. Admittedly not the architecture. Or—despite the best efforts of The New York Times to convince me otherwise—the sex. Possibly not the fashion. Certainly not the cars, as anyone can testify who has seen the front wheel of a Trabant detach and continue across a junction alone.

I feel like I’m backing myself into a corner here. Perhaps I am. Never do my right and left brains join forces with such verve as when they instruct me that Communism is a cancer: a usurpation of human life by human beings, and the ultimate fulfillment of the promise of the Devil in the Wilderness. Stalin and Ceausescu and Tito all looked out from the clifftop and told themselves: All this is mine. The lifeblood of Communism is lies, which are both a product of consciousness and its aberration. A minister of a South American revolutionary government once looked me in the eye and said: “But it’s not my limousine—it belongs to the people.” Cognitive dissonance has never been stronger than when buried beneath the doublespeak of the Eastern bloc.

“Freedom is a goal toward which we have marched for hundreds of years, from which we now recoil.”

What good, then? To answer, you must visit a post-Communist country. They were once undoubtedly hell—as anyone who has read Robert Kaplan’s accounts of the smoke-ridden nightmare of early-’90s Romania can attest. The poor Albanians were even banned from fishing in case their catch included a whiff of intellectual freedom. Yet what do these countries have in common now? They are all fine places to visit, having become the unwitting repositories of social cohesion. Look no further than the ongoing revolt of half of Central and Eastern Europe against the European Union. Or the unlikely rapprochement of the Italian “far left” and “far right’ in the face of the same. Or indeed the fetishization of Russia—a crypto-Communist security state by any measure—by the American “right.”

Such consanguinity defeats Beltway theorists. They see Marxism as the agent of revolutionary change, when it offered revolutionary conservatism. If Marx were alive today—with his abject misogyny and bourgeois home life—he would be vilified by the Third Wave. And the neo-liberals, with their dedication to freedom at any costs? As Western societies implode further with the abolition of barriers to capital and labor, it is these who appear to be the heralds of revolutionary change. As a result, the fault line at the center of “liberal-conservatism” grows ever wider—with conservatives like Britain’s Nigel Farage and France’s Marine Le Pen grasping harder at the nettle of protectionism. As indeed does the great Mephistopheles of protectionist paleoconservatism, The Donald.

This collision has not come unpredicted. Arch-pessimist—and talisman of 20th-century conservatism—Oswald Spengler foresaw that Western societies would ultimately revert to authoritarianism. Now this is finally happening—and within twenty years of the date he predicted—and we are finally confronting the ultimate dichotomy: freedom. It is a goal toward which we have marched for hundreds of years, from which we now recoil. The left advances an authoritarianism of thought to keep people from each other’s throats; the right, one of borders and movement. Both belie the liberal dream that individual self-realization would be enough to create a new human cooperation. Both see that deregulation has unleashed not the best in people but the worst, an atomized dystopia in which the pulse of human civility is but a dream.

All of which arrives us back at an awkward realization: that those Commies had a point. Can a new balance be struck around the protection—or, indeed, revival—of society? I don’t know the answer, and I’m sure you don’t either. But it is the question of our new century, and it is not one that will go away. What makes it so intractable is that society cannot be imposed from above, let alone re-imposed. Yet what makes it so ironic is that the very countries that once tried to do so have preserved more of the sap of human life than the West. They prize the qualities of strength and civility that we despise; they despise the fragility and introversion that we prize. It would be an unexpected denouement of the past century if the social aspic of Marxism had left societies more fit for the challenges of the next. Yet when our generation is put under the microscope of future centuries, that may be the precise conclusion.