We”ve Got the Biggest Balls of Them All 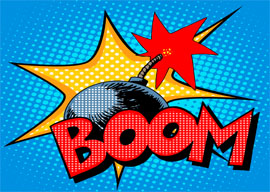 I”m headed to Deploraball tonight! It’s a gala event where Trump supporters will be dressed to the nines while calmly drinking and dancing together at a venue they paid for with their own money. Women, who are sick of wading through a sea of beta males, will be in formal gowns secretly hoping to find a mate. Men, sick of girls who say “like” every second word, will be looking forward to having a normal conversation with someone who knows what the Fed is. It will be a civilized event of decent human beings minding their own business, and the alt-left is determined to ensure it never happens.

They have launched an attack on the event, complete with a “target list“ that includes myself and a lot of the people I like to grab coffee with. Lauren Southern is there, as well as Cassandra Fairbanks, Roger Stone, and Mike Cernovich (Milo Yiannopoulos was going to be there but he’s doing a talk in Seattle where they”re threatening to stab him). Under my name, the list features hateful things I”ve said such as “Feminism has made women less happy.” (When liberals have their own words thrown back in their face they bitch about context or say it was “heavily edited.” When the right is told the horrible things we once said, we go, “Yep. Sounds about right.”) We”re not sure exactly what they”re going to do to us as we enter, but it’s looking pretty ugly so far. “Will you be wearing fur on 1/20 [sic]?” said an agitator to Fairbanks. “Red paint looks great on fur.” Organizers tell me protesters will also be bringing feces and urine to throw on us as the feminists did in Texas. I don”t doubt it. Protesters also told undercover reporters from Project Veritas they were going to unleash butyric acid into the air vents to shut the whole building down. Video of this exchange just blew up the news and showed that the “DisruptJ20 activists” intended to go way past antagonizing Deploraball. They intended to shut down all of D.C. for the inauguration the next day. Before the videos came out, they seemed very confident they would pull this off. When told that thousands of bikers will be forming a “wall of meat“ to prevent sabotage, they laughed and said a lot of these gangs are in feuds right now and will be too busy fighting each other to deal with protesters. It’s an obvious bluff said by someone who hasn”t been doing communist propaganda very long.

“One thing you have to give Bill Ayers and the Weathermen: They were willing to go to prison.”

Before the shit hit the fan, the revolutionaries over at the D.C. Anti-Fascist Coalition were talking a big game. “If you try to close us down we will look for your house, we will burn it,” said Luke Kuhn, one of the butyric-acid boys in the video. “We will physically fight the police…. We will go to war and you will lose.” It’s starting to look like Kuhn is much more decrepit than we thought, as Reddit has unearthed an essay from 1998 titled “Luke Kuhn on teenage sex and the UAP” that includes the lines “I started having sex by my own choice when I was 12″ and “All that stuff about older partners having an “obligation” to refuse is bullshit.” That followed the inimitable 1997 piece “Ronald McDonald the child-molesting clown,” and let’s not forget 2008’s “Why we like young boys by Luke Kuhn.” There may be “serious reason to doubt the allegations,” as Ben Smith said of his golden-shower scoop, but it’s worth noting that the Anti-Fascist Coalition video of Kuhn was recorded at Comet Pizza.

In part 2 of the Veritas videos, we learn that DisruptJ20 organizers such as Legba Carrefour intended to put chains on subway rails to shut down the cars (he’s still on Twitter proudly indicting himself). Now they”re saying it was all a joke and they knew there were spies in the audience. Of course, this is simple to refute. The tapes were made weeks ago and Veritas operatives have tons of emails continuing to explain how the sabotage tonight and tomorrow is going to go. These people are shitty liars, and they”re even shittier human beings.

They already seem to be losing their steam. Reports are now emerging that they are going to reduce the “chaos” to “just one bridge.” This is likely because, after seeing the tapes, the FBI has informed many of them that “using violence to achieve political gains” is the very definition of terrorism and it’s not a good time to be a terrorist in America. One thing you have to give Bill Ayers and the Weathermen: They were willing to go to prison.

Their determination to shut down a party they weren”t invited to is a perfect example of their problem with America. They don”t feel invited because they”re damaged losers and this election was a loss that damaged them fundamentally. Trump’s presidency is a call for true meritocracy, and the only thing communists hate more than freedom is fun.