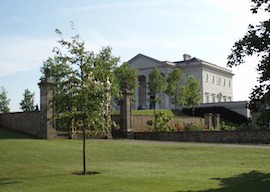 Bellamy’s and Oswald’s are the two best restaurants in London. Owned by two friends of mine, both gents, both English, the service and the food are as good as it gets, and it don’t get better, as they say in Chicago. Last Friday I got off the plane and went straight to Bellamy’s, where Gavin Rankin, the owner; Tim Hanbury, voted annually father and husband of the year since 1980; and Charles Glass, left-wing author and right-wing bon vivant, were waiting. Vodka, Châteauneuf-du-Pape, beer, and brandies followed.

Living in Gstaad does for one’s mind what cocaine does for one’s libido. The last conversation I had back home was with a cow that had trundled over to inspect me. Friday night made up for it. Timmy remarked that it was fifty years since his class at Eton had graduated and not a single one had ascended. I took exception. I was an usher at his wedding forty years ago and reminded him that his best man, Bunter, had become a duke. “But that’s inherited,” spluttered Timmy. “One inherits brains, another inherits looks, even courage, so what’s wrong with inheriting a title or money?” said the ancient Greek wise man. My argument shut everyone up.

Speaking of inheriting moola, we were all touched by Charles Moore’s column about his father recently. I have one of my own and told it to Caroline and Charles the next day at lunch. Soon after my own father’s death on July 14, 1989, I went to Charles’ for a drink and met his father. The gossip columns had erroneously published the hundreds of millions I had inherited. Mr. Moore, a very English gentleman, asked me if I could tell my real friends from those hoping to gain something. “It’s all a sham,” I told him, “invented by The Spectator for High Life: a rich Greek playboy son of a shipping tycoon. I haven’t got a bean and live off a hundred quid a week.” Charles’ father seemed delighted to hear it, smiled at me, and moved on.

Hangover or not, early Saturday morning I was driven out west, not the wild one but Oxfordshire. The occasion was Rosemary and Wafic Said’s 50th wedding anniversary, and the lunch should have been filmed and served as a lesson to new billionaires attempting to buy elegance. Tusmore Park, where the beautiful Palladian house stands, looked like a Capability Brown deal: endless lawns, gardens and grazing sheep, with a band playing as we arrived and greeted Rosemary and Wafic.

Revived by some brilliant rosé wine, I looked around the beautiful setting and saw Charles and Caroline Moore; Simon Heffer and his wife, who paid me an undeserved compliment; a couple of dukes such as Marlborough and Devonshire; a beautiful Henrietta Spencer-Churchill; too many billionaires to list; my friends Brian and Mila Mulroney (Brian is ex–prime minister of Canada); Robin Birley; Rupert Hambro; Henry Wyndham; the Radziwills; Lita Livanos; and my new best friend, sitting one away and in deep conversation with Princess Michael of Kent. He is Dr. Ralph Gonsalves, prime minister of St. Vincent and the Grenadines since March 28, 2001. Continuously and democratically elected, and a loyal Spectator reader to boot. We agreed on everything, especially that there’s nothing anti-Semitic about sympathy for the Palestinian cause, despite Bibi’s and American efforts to make it look so.

Wafic spoke first, without a script, and there was not one corny word or line, a very rare exception when talking about love and marriage. Then came Rosemary, and ditto, no corniness to drive one to the bottle. Beautiful and heartwarming stuff. Mind you, Julius, the majordomo taking care of me (also a Spectator reader), poured the Latour ’98 as if the Wermacht was arriving, and soon I was being overfriendly with everyone. Prince Pierre d’Arenberg, an old friend, raised his glass but kept his distance. I know the drill.

My question is how a man who has created and given millions upon millions to the business school in Oxford, has taken care of thousands upon thousands of Syrian refugees’ needs, has supported countless causes—as Lord Powell said in the third and last speech—has not been honored by the state, while flunkies and (libel laws prevent me from correctly describing him) lowlifes like this Philip Green man prance about with a handle. It’s a disgrace, and someone should wake up and do something, otherwise titles are a joke.

As the Latour settled, Alfie Boe and a great band began to knock the socks off “La Vie en Rose,” and I heard a youngster screech what a “great new song that is.” It got better and better, but then my driver took me back to London and a Saturday night alone, and abandoned was my punishment. Then it was the annual Pugs club lunch honoring, as always, our departed president for life—and death—Nick Scott.