What Doesn’t Stab You to Death Only Makes You Stronger 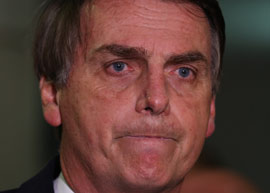 Last Thursday in the southeastern Brazilian city of Juiz de Fora, Jair Bolsonaro—variously described as “the most misogynistic, hateful elected official in the democratic world” and maybe even “the world’s most repulsive politician”—was nearly stabbed to death while crowd-surfing through a mostly adoring mob.

Bolsonaro, who has been called “The Trump of the Tropics,” has been riding atop Brazil’s presidential polls all summer. Then again, Bolsonaro’s chief rival, former Brazilian President Luiz Inácio Lula da Silva of the leftist Workers’ Party, would be outpolling him if he weren’t currently in prison on a 12-year corruption bid.

Smartphone video shows Bolsonaro hoisted upon a supporter’s shoulders and smiling broadly at the crowd—up until the moment someone nearly stabs out his guts.

When he arrived at the hospital, Bolsonaro’s blood pressure was a near-dead 10/3 and he had reportedly lost roughly 40% of his blood. His colon, lung, and liver had been pierced in the stabbing, and it took doctors two hours to keep him alive with emergency surgery and a partial colostomy.

“Bolsonaro couldn’t have asked for a better campaign gift than to be stabbed, live and on camera in front of his fans, and then survive the ordeal as the campaign enters its home stretch.”

With his father’s survival in doubt, Flávio Bolsonaro issued this statement:

You bandidos that tried to ruin the life of a guy who is the father of a family and the hope of all Brazilians. You just elected the president, and it will be in the first round.

One of every nine murders on Earth happens in Brazil. It currently has the world’s 16th-highest murder rate. Of the 25 nations with the planet’s highest homicide rates, all share something in common with Brazil—they are all either predominantly black or Hispanic. In Brazil’s case, the black/brown coalition slightly edges out whites in terms of raw numbers. But there is not a white-majority nation on earth in the Top 25.

In a nation scarred by over 60,000 homicides yearly for the past two years, Bolsonaro will be pulling off some high-level drama if he survives. He may still be in a hospital bed during the first round of voting in October 7, but odds are that he’ll still be alive—and that fact alone may land him in first place, especially since he’s campaigned hard on an anti-crime platform that borders on the hyper-militaristic. Bolsonaro couldn’t have asked for a better campaign gift than to be stabbed, live and on camera in front of his fans, and then survive the ordeal as the campaign enters its home stretch.

Moments after the stabbing, Bolsonaro supporters seized upon and beat the stuffings out of 40-year-old Adelio Bispo de Oliveira, a tragically mulatto-looking former member of the nation’s Socialism and Liberty Party who reportedly told police “God in Heaven ordered me to do it.”

Dilma Rousseff, Silva’s successor, blamed Bolsonaro’s inflamed rhetoric for the attack. “When you plant hate, you harvest thunderstorms,” she told a reporter.

When it comes to violent rhetoric, Bolsonaro is far from innocent. The week before his stabbing, he encouraged his supporters to “shoot down” members of the rival Workers’ Party. In 1999, he said that the Brazilian dictatorship of 1964-1985 “should have shot some 30,000 corrupt people, starting with President Fernando Henrique Cardoso.” He even had the gall to say that Augusto Pinochet was a slacker when it came to killing.

In March, when a “black, queer Rio de Janeiro city councilwoman” was murdered, Bolsonaro shrugged it off as “just another death in Rio de Janeiro.” Later that month, two buses in a campaign caravan for the Workers’ Party were hit with bullets. In 2016 alone, 28 Brazilian political candidates were killed.

Brazil is one of the most famously diverse—i.e., unmanageable—places on the planet. People are savagely divided by income—Brazil has the world’s 19th-highest level of wealth inequality, and with the odd exception of Hong Kong, every other country with a higher Gini coefficient than Brazil is, just as with the murder rate, predominately black or Hispanic.

At any moment, Brazil also risks lacerating its feet to bloody ribbons if it doesn’t keep tiptoeing around the giant glass shards of its intractable and insoluble racial diversity. As is the case elsewhere in Central and Southern America, Brazil’s elites are European and the lower castes are either indigenous yam-diggers or the descendants of African slaves. And as much as Brazil has been posited as a multi-culti paradise where everyone will eventually breed themselves into one big blurry and harmonious cappuccino-colored family, students of history understand that isn’t the way things tend to work. Usually such situations lead to chaos, and it’s almost as if you’d need a police state just so everyone can pretend to get along.

Bolsonaro, the spawn of Italian parents, phenotypically embodies Brazil’s Euro-elites. He has made racial comments that go wayyyyyy beyond anything Trump has said. He boasted that his five children would never date black people because they were “brought up in an educated environment.” He said the descendants of Brazil’s black slaves “are not even good for breeding anymore.” His proposals include selling off lands settled by indigenous Brazilians and the descendants of enslaved Africans.

Bolsonaro spares no other protected group from his venom:

Bolsonaro has compared same-sex marriage to pedophilia. He has bragged that he would punch any gay men he saw kissing in the street. He said that children should be beaten out of being gay and that “No father would like to have a gay son….We Brazilians don’t like homosexuals.”

And yet he’s still outpolling every other presidential candidate.

I left out the best part for last—his middle name is “Messias.” As with Trump, Bolsonaro has electrified a group of voters who were certain their politicians had left them for dead. But Bolsonaro has taken it much further than Trump—if his condition stabilizes as it seems to be doing, he will appear to have come back from the dead just in time for the election.