What to Do With Notre-Dame? 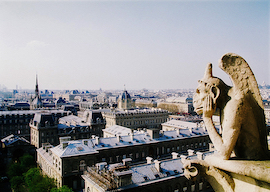 The monstrous regiment of modernists was so quick off the mark with their hideous, egomaniacal plans to rebuild the roof of Notre-Dame—one could not call any of their proposals a restoration—that I began to suspect that the fire that destroyed the roof was the result of a conspiracy by them. Gone were my suspicions that it was either Muslim terrorists or degenerate smokers who had set the fire, and my new hypothesis was perfectly reasonable. Modernists, after all, have done far more damage in the long run to the urban fabric of Europe than even the Second World War did; and it stands to reason that they, the modernists, would not want anything to escape their attentions for long, lest anything remain intact to shame by painful comparison their own wretched efforts.

So far their proposals have included apiaries and swimming pools, and all of them look like greenhouses for the cultivation of marijuana. And why not? After all, Baudelaire wrote a book about les paradis artificiels, that is to say those induced by psychoactive substances, and is not a spire an arrow pointing up to heaven? All conceptions of paradise are artificial in the sense than none of us has any direct knowledge of such a location; perhaps, in the spirit of ecumenical multiculturalism, a kind of Muslim-style paradise could be created under the glass roof (I shall refrain from describing it because young people might read this).

Of course, there is no end to the uses to which this prime space might be put. There could, for example, be a three-Michelin-star restaurant there. Think of the rent it would pay, the prices it could charge! The French state (which is responsible for the upkeep of the building) would—or at least could—be relieved of financial anxiety about it.

This proposal might be objected to because it would not be socially inclusive enough; the Pope would not countenance it because it would exclude illegal immigrants (except, perhaps, as plongeurs). The customers would be mainly wealthy foreigners, Russian oligarchs, Gulf oil sheikhs, and the like, and while this might assist with France’s yawning commercial deficit, it would do little for social justice, the ultimate aim of human existence, by which is meant the reduction of everything to the lowest common denominator.

“Perhaps the best solution would be a shopping mall in the roof, where the insolvent could continue their eternal search for the unnecessary.”

So a three-star restaurant will not do. We must think of something else. An amusement park for all the family, perhaps, themed on Jurassic Park or Mickey Mouse, or with alternating themes to avoid boredom. Or the space could be hired out for events, provided that they were relayed to the public in front of the west door of the former cathedral. The events should not be religious, naturally, because—since everyone is not of the same religion and the state is secular—religion divides rather than unites.

Think of the wonderful possible lighting effects through a glass roof! Not just the dull old floodlighting of old. Strobes and as many colors as Jacob’s coat! Never a dull moment, unlike in religious ceremonies such as the Mass. Next to social justice in the hierarchy of the good to which human life aspires comes entertainment, that is to say distraction.

Distraction from what, though? First of all, boredom—the boredom of silence and being alone with one’s thoughts, which as everyone knows is the most terrible of states to be in, a kind of hell. Boredom is a much-underestimated cause of a social pathology; it is the avoidance of boredom that drives many people to drink, vandalism, drugs, and violence. At least a terrible life is not boring, as a good one often is; that is why many women prefer appalling, violent men to decent, responsible, dull ones (it is the latter they most fear). A crisis at home prevents you from having to confront the triviality of human existence.

Perhaps the best solution for Notre-Dame would be a shopping mall in the roof, where the insolvent could continue their eternal search for the unnecessary—and, in the condition of modern mass taste, the uniformly inelegant and aesthetically worthless, too. Escalators up from the former altar would ensure that those with the illness of obesity would not have to get out of breath in their ascent heavenwards, and surely it would not be above the wit of man to make the roof mall wheelchair-accessible. If there were not enough space for shops, they could be cantilevered out, the modern equivalent of the flying buttress and in its way just as miraculous.

It is necessary to move with the times, and moreover to show those medievals that we in the 21st century are just as capable of artistic creation as were they. And let us not forget how much of the roof that burned wasn’t medieval in the first place, it was only 19th-century. True, Viollet-le-Duc steeped himself in knowledge of the medieval period and was, moreover, an architect of genius, but his work was inauthentic all the same, and a glass roof would be an authentic expression of our times, authenticity being (next to social justice and entertainment) the highest good. One must always be authentically oneself, even if one’s authentic self isn’t very charming.

I dined a couple of weeks ago in Paris with some Parisians of the we-must-move-with-the-times school of thought (or feeling). They were all for a glass roof, and against an attempt to restore the roof to what it was before, with or without the spire. Surely in the era of smartphones we could build something as good as anything our predecessors built, who did not have the internet, let alone Twitter?

On the other hand, I dined the following evening with some Parisians of the school (predominant in number but probably not in influence) of restorers-to-the-status-quo-ante. They said they would be prepared to descend into the street to demonstrate against the modernist vandals, though they were not the demonstrating types. Their rage at the modernists’ proposals was almost palpable.

Now here, I thought, was a cause at last worth having a civil war over! The future of Mankind is at stake.