What 9/11 Wrought: The Bush Legacy 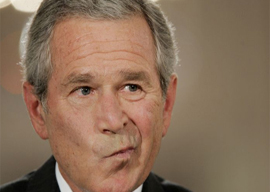 In Cairo in 1943, when the tide had turned in the war on Adolf Hitler, Winston Churchill, who had embraced Joseph Stalin as an ally and acceded to his every demand, had a premonition.

“Cromwell was a great man, wasn’t he?”

“Ah, but he made one terrible mistake,” Churchill continued. “Obsessed in his youth by fear of the power of Spain, he failed to observe the rise of France. Will that be said of me?”

Yes, history will say that of Churchill, who in 1946 delivered his “Iron Curtain” speech in Fulton, Mo., to decry Stalin’s persecution of that half of Europe into which Churchill had welcomed the monster.

Of George W. Bush, it will be said that, after 9/11, he led his country on a utopian crusade for democracy in the Muslim world—and all but ignored the rise of a rival with a potential that Stalin never had to surpass and eclipse the United States as first power on earth.

Initially, Bush handled it masterfully. With his nation behind him, in three months, he effected the overthrow of the Taliban who had given sanctuary to Osama bin Laden and had al-Qaida on the run.

Then, full of hubris, the conquering hero went before the Congress to all but declare war on three “axis of evil” nations—Iran, Iraq, North Korea—not one of which had had anything to do with 9/11.

Instantly, Bush split his international and national coalitions. NATO allies Germany and France, who had followed us into Afghanistan, were now “an axis of weasels” to the blustering neoconservatives in Bush’s court.

And what was Bush’s rationale for war?

Though Iraq had not attacked us and did not threaten us, Saddam Hussein had weapons of mass destruction and could not be trusted not to use them in an attack on an America that could incinerate his family and country in an afternoon.