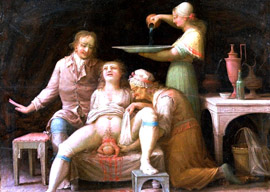 I watched the birth of my third child this week and it’s amazing how quickly you forget the bad parts. I understand why. We probably wouldn”t be here if we didn”t immediately forget how difficult childbirth is. I”m still at the part before your mind wipes everything clean and I”m writing this down so the rest of us can retain these memories forever. I hope I”m not inadvertently ending the human race.

It all started nine months ago when my wife was interested in intercourse. I can remember which session made this baby. It was April 16th. I had already given up on getting laid that night and had pleasured myself at the computer. A couple of hours later, out of nowhere, I was presented with the option. Refusing sex during marriage is like a government program saying they need less funding”if you refuse funding, you”ll never get it again. So I lay back and thought of England as she ravaged my body as if I was a common street whore.

A couple of months later came the news. We were having another baby. Things were OK at first but before long, my spouse became increasingly moody and overweight. About six months in, she started to show signs of obesity and things got more uncomfortable until the very end when she became downright huge.

The final stretch of a pregnancy is beyond difficult. First of all, you can”t go out. Labor can happen any moment during the last month so if your friends are going on a ski trip, bid them adieu. You can”t even go to a bar because being drunk when your wife is in labor has this huge stigma around it. The same goes for drinking at home. This means the final days are devoted to being completely sober and dealing with someone who is not acting like herself and not looking like herself. Sex is out, too. I”d never call what started this whole thing “rape,” but I had no choice in the matter and the way things have been going these past few months, you”d think my government program asked to be cut off completely.

When she FINALLY began labor on Saturday night I had been to a bar with some friends and was tired as hell. Her contractions began at 2 in the morning and she only let me sleep until 5, when I was awakened by these extremely disturbing guttural sounds. Not only was I tired and a little hungover, but I had to stare at a spouse who looked like she was doing the dip on a roller coaster every five minutes. Thanks, God!

The trip to the hospital had me flustered. I was in such a rush I left my wallet in my other pants. This meant no money for the car service, which led to a snippy “GET IT OUT OF MY FUCKING WALLET, THEN” from my wife that nearly made me cry.