What Happened to the Wall Street Sheriff? 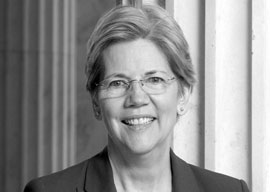 Yes, we”re all familiar with her embellishing her family bloodline by claiming to be a descendant of Native Americans to get favorable treatment as a tenured professor at Harvard Law School.

But let’s not focus on her red-skinned fable.

Elizabeth Warren has spent her congressional career raging against big-bank bogeymen. She was elected from the People’s Republic of Massachusetts based primarily upon her tough stance against the financial industry. “Wall Street CEOs”the same ones who wrecked our economy and destroyed millions of jobs”still strut around Congress, no shame, demanding favors and acting like we should thank them,” she boomed at the 2012 Democratic National Convention.

Hallelujah to that, Sister Warren.

I have no qualms with ripping on the coke-addled computer nerds on Wall Street who make money hand over fist without creating anything. I agree with Brit Lord Adair Turner, chairman of the country’s chief financial regulatory body, that most of what goes on in the ledgers of too-big-to-fail banks, trading on amalgamated debt instruments and betting if blue-collar Billy will lose his house, is “socially useless.”

Chief Warren is more or less on the same page. Or so I thought.

The media treats the nonindigenous senator as the Joan of Arc of Main Street, warring to curb the idiotic behavior that threatens our economy into another free fall. Instead, she’s another lapdog, willing to sit and roll over at Goldman Sachs” command.

The Senate’s recent vote on Rand Paul’s bill to audit the Federal Reserve was proof enough of her perfidy.

Senator Warren voted against the measure. She previously stated her opposition to the bill, claiming that while she supports “greater congressional oversight of the Fed’s regulatory and supervisory responsibilities,” any attempt by the federal government to take a close look at the central bank’s books “risks politicizing” its “monetary policy decisions.”

I”m calling bullshit. But first, a quick history and economics lesson on the chicanery behind the Federal Reserve.

If you know anything about the beginnings of the Fed, you know it’s the product of a conspiracy hatched at the Jekyll Island Club off the coast of Brunswick, Ga., between America’s richest bankers and one Rhode Island senator. The Federal Reserve Act passed through Congress in 1913 just before Christmas break, ensuring it received little debate or attention. Woodrow Wilson”that huge fan of limited government”signed it into law. The bill never had a congressional author”it was likely drafted by a Jekyll Island conspirator.

The Fed’s purpose is to serve as a “lender of last resort” to banks that find themselves insolvent. What this meant in practice is that big, highly connected banksters can pawn off government bonds for a fresh influx of credit. That credit then gets swapped across the banking system through the fraudulent process known as “fractional reserve banking.”

All along the way, the Fed’s newly created cash bids up prices until it reaches us lowly proles. These are called “Cantillon effects,” named after the French economist Richard Cantillon. Big bankers get the Fed’s easy money first. Everyone else is left begging for scraps.

When the livelihood of the entire banking industry depends upon fresh injections of Fed cash, it’s obvious that a true audit of the central bank will never happen. Bajillionaires aren”t about to let the plebes in on their wallet-stuffing operation.

Both Wall Street and the Fed lobbied Congress hard against Senator Paul’s audit bill, with Chairtoad Yellen strongly voicing her opposition. So it’s no surprise the measure failed by a vote of 53″44. Senate rules ensure that no law is passed unless it makes it past cloture, which requires 60 votes. If the bill actually had a chance of getting through the upper chamber, you can bet a continental that the final tally wouldn”t come anywhere close to an affirmative.