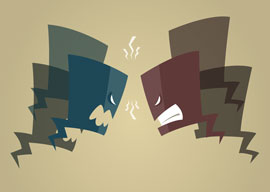 I see I have once again made the Southern Poverty Law Center’s Hatewatch Headlines. They link to RightWingWatch.org, who caught me hatefully spewing hateful hatefulness in an interview I gave to blogger Joseph Cotto:

Practically all educated black Americans…are communists. And white conservatives are the only people in the U.S.A. trying to “transcend contentious racial issues.” Everyone else is keenly exploiting them for group advantage and personal enrichment.

Let me pause briefly to wonder how it is that Cultural Marxists get all the dot-org websites, then allow me to list some of the hatefulness on the $PLC side of the fence. Here a few things the hatewatchers hate.

In the pantheon of American history, conservative old white people have pretty much always been the bad guys, the keepers of the hegemonic and reactionary flame….It’s OK. Because in about forty years, half the country will be black or brown. And there is nothing you can do about it….We just have to be patient. And wait for you to pass into that good night, first politically, and then, well….

“When scientific facts contradict the feel-good fantasies of infinite human equality and malleability, the left is as hot in denial as any backwoods creationist.”

As a clue to what actually happens when black ‘n’ brown numbers rise to a majority, the Uncle Tims might want to check out the last dozen presidents of Mexico or Brazil, who don’t look anything like California lettuce-pickers or Carnavaleras.

Living in black neighborhoods. There is a term of art in economics that I like: “revealed preference.” The root idea is: Never mind what people say they prefer, or what some pure-reason formula proves they should prefer, but what their behavior shows they actually prefer.

The revealed preference of hatewatchers is to live among white people. The aforementioned Tim Wise allegedly lives in census tract 134 west of Nashville, Tennessee: 97% white, 0% black. I can’t discover the census tract of Morris Dees, proprietor of the $PLC, but to judge from the interior of his home somewhere around Montgomery, Alabama, I’m betting it’s not tract 12 (0% white, 98% black).

Statistics. Hatewatchers are often intelligent, but they go through a voluntary process of auto-enstupidation that leaves them innumerate when thinking about human beings. If you mention the US Department of Justice crime statistics, for example, hatewatchers groan, snigger, and roll their eyes. “That old stuff? You don’t take that seriously, do you? Hoo hoo!” (You can actually hear this happen on last Friday’s Alan Colmes radio show.)

Concerning which group they actually do choose to live among, see previous item.

Reality. What’s important to hatewatchers is feelings, wo wo wo feelings. “I may carry a Y chromosome, but by golly I feel like a woman!” Well, then (says the hatewatcher), you are one, honey, and we’ll adjust your anatomy accordingly.

There is a psychiatric condition called Cotard’s Syndrome in which the sufferer believes himself to be dead. Would it be right to bury or cremate such people? If not, why not?

The Past. Malcolm Muggeridge wrote of his friend George Orwell that: “He loved the past, hated the present, and dreaded the future.”