What History Does to Heroes 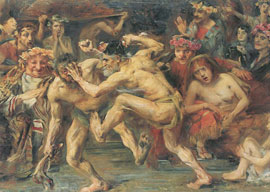 Just before I left for the Greek islands I went to dinner at Eugenie Radziwill’s, whose other guests included the great Barry Humphries, his wife Lizzie, and a man I had never met before but whose name rang a distant bell: John Sutherland. The bell turned out not to be so distant, the prof having reviewed a book for the Speccie just that week.

I was late as usual and when introduced to Susan Sutherland, I made the gaffe of asking her whether the professor was her father or her husband. She was a very pretty English Rose type, and smilingly she said, “He is my husband” without making a face over my rudeness. Her hubby seemed amused and we got along swimmingly at dinner. After drink took hold, I told him that if all left-wing academics were as nice as he was, I’d tolerate even hush puppies, but never socks and sandals.

“When in trouble, think and dream about the past.”

Barry Humphries is on a sticky wicket, as they say in dear old England. Importing people who know the difference between Rambo and Rimbaud can be as dangerous as reading rather than counting in Gstaad. Money counts a lot here, and lotsa money counts a hell of a lot more. Yes, once upon a time Gstaad was a foreign writers’ colony, mostly American, but that all ended long ago. So it was a pleasant surprise to meet someone new whose wife was beautiful and young and had not been worked over by a plastic hacker. Perhaps it’s the start of something new, and as Cole Porter wrote, I loved the looks of her, and the lure of her, and I wouldn’t mind at all to make a tour of her.

While I’m on the subject of brains floating on Greek waters, Homer personally identified with his greatest hero Odysseus far more than he did with his other characters, and he showed him in a better light than later tragic poets did. I was given a rare book of Sophocles for my birthday, and old Soph describes the King of Ithaca as hard and of base morality. Ouch! He also says Odysseus was the illegitimate son of Sisyphus and was only brought up by Laertes. Euripides tells us in Iphigenia in Aulis that Odysseus pressured for the sacrifice of Iphigenia, whereas Agamemnon and Menelaus and Achilles tried to save her. According to the Greek professor Panos Sykiotis, Homer saw both himself and Odysseus as the ideal Greek man, succumbing to the same ambivalences and the same contradictions of his own psychic condition. I’m getting myself in deep waters, but being Greek I’m going to get out of them by steering clear of the storms in Homer’s soul. It’s very simple, really. Homer makes plain that Odysseus’s faults are those of the gods and oracles. What could be easier than that?