What if Charles Murray Is Right? 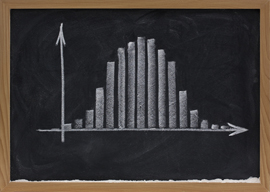 The extraordinary decline in the cost of sequencing a whole human genome, from $10 million in 2008 to $1,400 by late 2015, means that in the coming years science will almost certainly be able to answer the Charles Murray question: Are some of the gaps in average IQ among the races at least partly genetic?

It’s past time for public intellectuals to seriously ponder the implications of either answer: yes or no.

Last week, I discussed what it would suggest for public policy if Murray turned out to be wrong. This week, I want to consider what is likely to happen if Murray turns out to be right.

Behavioral genetics is a science that is speeding up. Two weeks ago, The New York Times headlined:

And this week we”ve seen a new study, “Detecting polygenic adaptation in admixture graphs,” that reports:

We also provide evidence that variants associated with several traits, including height, educational attainment, and self-reported unibrow, have been influenced by polygenic adaptation in different human populations.

“It is widely assumed that for Murray to be proved right would be cataclysmic to all that is right and holy, such as the reputations of his critics.”

And even if Westerners are someday prevented from further investigating this topic by the ongoing growth of science denialism, the Chinese are likely to be less squeamish. For example, here’s a photo from Steve Hsu of the spectacular China National Gene Bank, now under construction in Shenzhen.

It is widely assumed that for Murray to be proved right would be cataclysmic to all that is right and holy, such as the reputations of his critics.

But what about broader harms?

You often hear that Murray couldn”t be right because the Declaration of Independence asserts “that all men are created equal.” And how else can you interpret that except as a scientific hypothesis about genetics?

Thus if Murray is right, America has to go back to the British Empire. Or something.

But more acute observers have long pointed out that empirical equality is not what was meant by Jefferson (who, after all, was almost a foot taller than Madison). G.K. Chesterton observed in 1922:

The Declaration of Independence dogmatically bases all rights on the fact that God created all men equal; and it is right; for if they were not created equal, they were certainly evolved unequal.

The late Stanford computer scientist John McCarthy, who more or less invented artificial intelligence back in the 1950s, told me that if he were tasked with debugging the Declaration of Independence (which, let us recall, Jefferson presumably wrote in an all-nighter), he would insert “in” after “equal”:

We hold these truths to be self-evident, that all men are created equal, [in] that they are endowed by their Creator with certain unalienable Rights, that among these are Life, Liberty and the pursuit of Happiness.

Abraham Lincoln said much the same thing as McCarthy in his 1857 response to the disastrous Dred Scott decision:

I think the authors of that notable instrument…did not mean to say all were equal in color, size, intellect, moral developments, or social capacity. They defined with tolerable distinctness, in what respects they did consider all men created equal”equal in “certain inalienable rights, among which are life, liberty, and the pursuit of happiness.”

In other words, the Declaration is intended as a lawyer’s statement of rights, not as that oxymoronic thing: a scientific dogma.

Everybody who is anybody has an opinion on what the final answer to the Charles Murray question would mean, but there has been remarkably little research on this supposedly pressing topic.

For example, how many Americans actually know that there exists a gap right now? The last survey I could find on this question stemmed from sixteen years ago. A 2001 Gallup/Phi Beta Kappa poll asked:

Just your impression, is the academic achievement of white students nationally higher, lower, or about the same as that of black and Hispanic students?

Back in 2001, only 48% of respondents gave the factually correct answer: higher.

Are Americans still that out of touch with reality today? Nobody knows.

It is widely assumed by high-IQ whites that a scientific finding of a genetic contribution to the racial gaps in IQ would be catastrophically shattering to black self-esteem.

First, one thing to keep in mind is that there are about 7 million African-Americans with higher IQs than the average white American.

Second, back in the late 20th century, low self-esteem was seen as the magic bullet that explained all social ills. A couple of recent articles (one in New York magazine, one in The Guardian) have looked back on how the self-esteem craze was launched almost single-handedly by a California Democratic state legislator named John Vasconcelos.

Raising self-esteem as the panacea for all social problems was popular in part because it seemed to explain poor black performance: They simply lacked self-esteem.

But eventually it started to dawn upon researchers that low self-esteem could hardly explain black troubles, as seen in this headline in The Guardian in 2000:

In general, blacks seem to be pretty pleased with themselves for reasons that they find highly persuasive. Would this really change?