What if Zimmerman Walks Free? 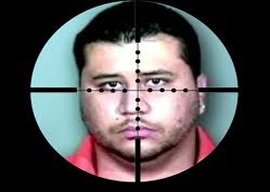 Handcuffed, taken in and interrogated, Zimmerman told police Trayvon had been acting suspiciously that dark and rainy night, that he had followed Trayvon, been knocked down and battered on the ground, and, fearing for his life, pulled a concealed handgun and shot him.

Sanford police and prosecutors concluded that Zimmerman acted in self-defense and had not committed a provable felony. They let him go.

A racial firestorm followed. “Blacks are under attack,” railed Jesse Jackson. “Killing us is big business.” Arriving in Sanford, the reverend dialed it up. Trayvon was “shot down in cold blood by a vigilante … murdered and martyred.”

Rep. Maxine Waters’ charge of “hate crime” was echoed by radio talker Joe Madison. Rep. Hank Johnson said Trayvon had been “executed.” The Grio compared his killing to the lynching of Emmett Till in Mississippi in 1955.

The New Black Panther Party put Zimmerman’s face on a “Wanted Dead or Alive” poster, called for 5,000 black men to run him down and said Trayvon had been “murdered in cold blood.”

Zimmerman and his family have been in hiding for months in fear for their lives after the death threats.

President Obama expressed his empathy with the parents.

“With this evidence, how can a jury convict Zimmerman of murder?”

“If I had a son, he’d look like Trayvon. And I think (the parents) are right to expect that all of us as Americans are gonna take this with the seriousness it deserves and that we’re going to get to the bottom of exactly what happened.”

Obama said not a word to cool the lynch-mob atmosphere created by some of his major allies in a nation where he is the chief law enforcement officer. And so the campaign to convict Zimmerman of racist murder in the public mind, before he ever got to trial, proceeded on.

Rep. Jan Schakowsky called Trayvon’s killing a “modern-day lynching.” CNN claimed to have picked up the phrase “(bleeping) coons” on the tape of Zimmerman’s call to police, but had to retract when an enhanced version of the tape revealed no such slur.

Three times NBC used a version of Zimmerman’s call to the police edited to make it appear he racially profiled Trayvon.

Zimmerman: “This guy looks like he’s up to no good, or he’s on drugs or something. It’s raining, and he’s just walking around, looking about.”

Dispatcher: “OK, and this guy, is he white, black or Hispanic?”

The transcript was spliced to have Zimmerman say: “This guy looks like he’s up to no good. He looks black.”