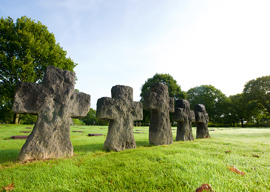 Back in New York and digesting the five glorious days I spent in Normandy. What was the fighting all about, you may ask: Was it about equality, cultural diversity, man’s dignity? All liberal catchphrases these days. Liberty and freedom are also big words now, but all I see are massive central governments with arbitrary powers à la Brussels and Washington, D.C. Normandy promised us a lot but, as far as I’m concerned, delivered little. If freedom of speech was nonexistent in Germany in 1940, the arbitrary powers vested in political correctness make it just as rare in London and New York in 2018.

Our stifling culture of PC now makes the sacrifices of those young men who fell in Normandy seem, well, not in vain, but hardly worth it. The material and spiritual degradation of the postmodern West—the porn, the violence, and the greed—are not worth the life of a single Green Jacket, GI, or Panzergrenadier. Call me a cynic if you like, but after visiting the graves of the young American, British, Canadian, and German soldiers, grief was replaced by rage at what we’ve done with our precious victory. We are now all prisoners of a stifling cultural uniformity that punishes those who trespass as quickly and as mercilessly as any Gestapo visit ever did. Qualities such as virtue and civility are now seen as irrational and harmful, and PC humbug reigns supreme.

“After visiting the graves of the young American, British, Canadian, and German soldiers, grief was replaced by rage at what we’ve done with our precious victory.”

I’ve already mentioned our führer James and the king of LNG Peter, and mein kamerad Tassilo, the rest being John Moore, a very successful businessman; Matthew Westerman, of the Imperial War Museum; Martin Houston, an oil and gas tycoon; Robinson West, a Washington insider; and Tom Harley, an Aussie international fixer on his way to Saudi Arabia, whom I instructed to tell “that fat towelhead MBS to stop murdering Yemeni children through starvation,” and who answered me that “I will make sure to use just such words for the maximum effect.” All nine of us are history buffs, and we sure learned history down to the smallest detail for five days.

Operation Cobra, launched by the Americans at the end of July, created the decisive breach in the German lines. Fifteen hundred B-17s and B-24s churned up the landscape with saturation bombing, and fighters with napalm joined in the cataclysm. Panzer Lehr was literally pulverized, 45-ton Panzers flying through the air as if they were toys. General Fritz Bayerlein, whose life was saved by a miracle, answered headquarters’ orders not to retreat with the following: “None of my men will retreat a single inch as they are all dead.” Still, the Germans held out in pockets set up on the Coutances–St. Lo road. The Normandy hedges, tall and thick, helped the defenders set up and move, set up and move. “Better than concrete,” said a grenadier.

Now Patton’s time had finally come. He landed in Normandy, told someone who warned him about snipers to “get lost,” took command of the Third Army, and launched into the fray. A hundred thousand men followed. The Germans could only look at the thousands of men and wonder what if. At the start of the Normandy campaign the Germans had 2,400 tanks; after 77 days of war they had…24. You do the math.

When the weather closed up, the Wehrmacht counterattacked and breached Allied lines time and again. When the sun shone, Wehrmacht Kaput. Back in Berlin, Goering was enjoying his morphine, incidentally. What moved me the most was reading the ages of those fallen soldiers of all sides. I picked two out of 11,000 at the German cemetery at Marigny: Grenadier Christian Herrmann, 17 years old, buried in the same grave aside Sven Wieckmann, 18. Dark stone crosses for the Germans, slabs for the British, and white crosses for the Americans, all lined with evergreen oaks, made a magnificent resting place, with the opening words of the “Battle Hymn of the Republic” carved on the bottom of the statue of a naked warrior guarding the dead.