What the Frick is Fracking? 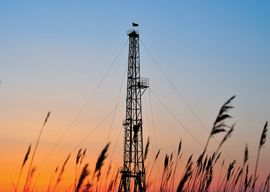 In the frothing debate over what energy resources we should use to stay on top, natural gas keeps bubbling to the surface. Oil has become too costly, and not only in financial terms. At the risk of sounding Gaye, war is not the answer. “Drill, baby, drill” makes for a great campaign slogan, but our oil reserves have been on a nosedive since the 1970s. Wind and solar power sound groovy, but the resources required to create them will continue to dwarf the energy they produce for at least another 20 years. France is happy with nuclear power, but getting Americans to accept nuclear energy is about as easy as getting them to accept France. Natural gas burns 30% cleaner than oil and 45% cleaner than coal, though some say methane-gas problems reduce that number to less than 25%. So what’s the problem? In a word: fracking.

What the frick is fracking? One of the best ways to obtain natural gas is a technique called hydraulic fracturing—hence, “fracking”—where the drill goes straight down and then splits off horizontally using water and chemicals to fracture the shale and seize the gas that gets released in the process. This was a fool’s errand for most of the past century, but the last ten years have seen it catapult into the hot new way to get fuel. Despite contentious debates over its profitability, fracking produces 90% of the country’s natural gas; the controversial shale fracking that incenses the environmentally sensitive supplies a good 25%. But it’s grown so fast and with such fervor, some huge mistakes have been made. The most serious was when fracking chemicals shot off in the wrong direction and polluted Pennsylvania water wells. Such mistakes were spotlighted in an incendiary documentary called Gasland that shows small-town American folk hoisting jugs of toxic diarrhea that oozed from their taps.

“Eco-activism is a luxury of the rich.”

Right now, the fracking debate’s Ground Zero is Sullivan County, a relatively poor enclave of upstate New York that borders the all-fracked-up state of Pennsylvania and has more shale than you can shake Tommy Lee’s dick at. I live here most of the summer, and the ground has been clear-cut so many times there is no longer any topsoil. It’s so rocky, you dig holes with a pickaxe instead of a shovel. Most farming disappeared three generations ago, and the only industry the area ever had was when Pennsylvania would throw us a log and let us process their timber. I say “us” with some audacity because at best I’m considered a “weekender”; at worst, they refer to me with such horribly urbanist terms as “cidiot.” I am apt to join neighbors such as movie star and anti-fracking activist (fracktivist?) Mark Ruffalo, who sees no need to risk polluting our wells and blowing all future vacations to help big business. However, eco-activism is a luxury of the rich. One of the local store owners near my house (the only store owner, actually) agreed to lease his land to an oil company and was paid on the chance the legislation would make it possible. Despite this move leading to no danger and no drilling, he’s persona non grata among the weekenders, and that means only real locals will shop there. But real locals shop at WalMart, so his business is doomed.