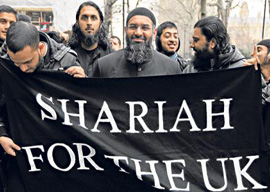 Being recently stuck for many hours in an exceedingly narrow space on a plane headed from London to DC, I was desperate enough to grab that garish British tabloid the Daily Mail when the stewardess offered it to me. On page four, I noticed a column by a renowned critic of Third World immigration, Melanie Phillips, who in 2006 published the book Londonistan. In her book Phillips loudly lamented Islamists” resettling of London. I”ve also encountered Phillips’s writing in various neoconservative publications where she deplores the peril to the Jewish people (Phillips is Jewish with a big chip on her shoulder) represented by “Christian supersessionism.”

Apparently the Christian belief that Christ’s New Covenant somehow supersedes the older Jewish covenant poses a threat to Jews everywhere. One would have to assume this danger exists to an alarming degree wherever orthodox Christians congregate, unless these Christians explicitly teach there are two equally valid covenants, one for the Jews and the other for themselves. Nowhere, however, does Phillips suggest that this theological generosity should be mutual, but then as a neocon she may not have to reach out to brain-dead goyim.

In her latest column Phillips is steaming that a British pol, George Galloway, won an election in Northern England by appealing to Muslim voters. She describes Galloway as a renegade Labourite who won as a Tory. She also calls him a “discredited demagogue” whose “torrid triumph” may be a threat to British democracy’s future. Galloway also had the gall (pardon the pun!) of praising his Muslim constituents” piety and, to Phillips’s outrage, noting that his Muslim Labourite opponent “drank alcohol” in violation of Koranic teachings.

Galloway is apparently pursuing the same alarming strategy as Ken Livingstone, the former London mayor who is now locked in a tight race with his Tory successor Boris Johnson. Livingstone has expressed respect for Muslim piety and is even suspected of having “aligned with the Muslim Brotherhood, whose goal is to conquer the free world for Islam.” Phillips expresses her fear that Livingstone, like Galloway, may win by becoming an anti-democrat:

And if Livingstone wins in London, the temptation will become overwhelming for other unprincipled politicians on the Left similarly to play the Islamist, anti-West, anti-gay, anti-Jew card….The very democratic process is at risk of being turned into a vehicle for the promotion not just of religious bigotry but of the destruction of the West itself.