What Will New York Do in Lieu of Liu? 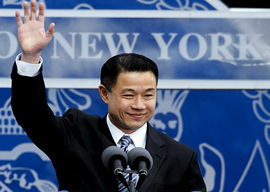 In New York City, an unraveling campaign-finance scandal is leading toward the possible resignation and indictment of John Liu, a former city councilman known to be planning a mayoral run.

Liu is caught up in a scandal where his campaign is charged with taking money illegally donated by a supporter.

If true, what makes this so incredibly stupid is that Liu is the City Comptroller, i.e., the chief treasurer, accountant, and public-pension investor responsible for overseeing billions of tax dollars. Having a comptroller embroiled in a campaign-finance scandal is as embarrassing as having a police commissioner caught selling crack.

The scandal began with the arrest of one of Liu’s large campaign donors. This donor also served as a “bundler,” someone who organizes other donors and helps bring in more campaign contributions.

Some of these bundlers find it convenient to violate campaign-finance laws and are able to use their positions to donate more of their own money to a campaign than they would otherwise legally be allowed.

“Having a comptroller embroiled in a campaign-finance scandal is as embarrassing as having a police commissioner caught selling crack.”

With city campaign-finance laws being what they are, these big donors can”t invent fictitious people as donors or keep a slush fund. Instead they must donate their own money and get some poor fool to act as a “straw donor.” The straw donor gets a lump of money from the actual donor and turns around to donate it in their own name, usually through the same donor who is acting as a “bundler.”

This is what one of John Liu’s bundlers allegedly got caught doing. He reportedly told an FBI agent that he would donate through these straw donors to keep things looking legal.

Rogue campaign bundlers are nothing new and not necessarily a political career’s death knell. Hillary Clinton had a problem with one of these bundlers but managed to stay above the fray. When her campaign managers learned that some of her money was donated illegally, they quickly identified all the donations and returned them. Like Liu’s accused bundler, Clinton’s rogue bundler was also Asian.

In Liu’s case, there were months of silence and the return of a token number of donations.

That would be bad enough, but it got worse with his campaign treasurer’s arrest on Tuesday. Among other things, the campaign treasurer was accused of falsifying donation records so that the Liu campaign would be entitled to more matching campaign funds. New York City’s generous $6-to-$1 matching funds can make politics more corrupt, since campaigns will be less scrupulous about raising money when they are desperate to sextuple it.