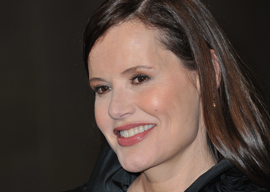 When you take into account the entire world, feminists have a point about 80% of the time. The other 20% is where things get unreasonable, especially here in America. If feminism were a month, it would be rational for about 25 days and totally absurd the remaining five.

I recently attended the “2nd Global Symposium On Gender in Media” in NYC on a lark. But “gender” doesn”t include the other side: Out of a good 300 guests, I was one of maybe four males, and the whole conversation was about getting more inspiring women on the big screen.

Geena Davis Institute founder Geena Davis began the symposium with a charming talk that was self-effacing and rational with only a few plot holes. She began her institute when she was watching movies with her daughter and noticed the lack of female role models (she acknowledged that rolling off a cliff isn”t what she wants for her kid). “It’s entertainment,” she admitted, but why can”t there be more movies for girls?

“Who says women need to be kick-ass protagonists in 50% of films? Story heroes tend to be leaders, and storytelling in general may naturally favor males.”

All right, that makes sense”or perhaps made sense when she was childrearing in the early 2000s. Today my daughter can choose from a master Scottish archer, a princess with cryokinetic powers, and a chick with magic hair that can beat up anyone. (When she gets older, I might let her watch Kick-Ass 2, where the heroine is so powerful that one of the male, liberal actors decided the film was too macho and refused to support it.) My sons have to fight to avoid these films. They”re everywhere.

Davis lamented the way women are portrayed globally; fine, but then she claimed America is responsible for 80% of the world’s media so it’s our job to fix everything. Things got even weirder when she bemoaned the fact that women are expected to be slender and beautiful in movies: as she spoke, photographers feverishly snapped pictures of this thin and attractive woman who made a fortune being thin and attractive.

The other speakers were academics, UN appointees, or beneficiaries of some bullshit institution like Davis’s that guilt-trips money out of corporations”they want women in the workforce but they”re basically on the dole. One of the few truly employed, Dete Meserve, runs the production company that did the film What Women Want. I started to wonder exactly that.

If it’s equal opportunities, they got it. As C.H. Sommers (the “factual feminist”) points out, American women do not earn $0.77 for every dollar a man makes. Yes, there are fewer female CEOs than males. That’s because women tend to value homemaking more than moneymaking. This is why female resumes do worse than the male equivalent. Men are a better investment.

That’s not a bad thing. Motherhood is a miraculous and beautiful gift. Why are feminists devaluing it? Today’s feminism is young, dumb, and full of myths. It’s no longer about making women equal to men. It’s about eradicating traditional female roles and replacing them with male ones. Ladies, I”m in the workforce. It’s a bitch.

Davis said that although the number of women running companies in the real world is low, in the fictional world of film “CEOs can be 50/50 tomorrow””if movie makers listen to her institute. Once again, social scientists are handed piles of guilt money to do research without questioning the original hypothesis. Why would anyone think women need to be kick-ass protagonists in 50% of films? Story heroes tend to be leaders, and storytelling in general may naturally favor males. They”re the ones who are responsible for taking down the bad guy in real life.

(It’s also strange to assume directors need to be 50% female, which came up a lot. Directing is a whore of a job. You need to be an asshole mathematician to pull it off. If we need more women in that role, we also “need” more gay males in golf.)

The free market can keep it real without research institutions. When liberal Hollywood tries to force anti-war or anti-fracking movies down our throats we barf them back up. When they bite their lip and glorify an arms dealer who kills terrorists, everyone’s happy. If more inspiring roles is what half of the population wants, they”ll get it.

But the conference’s main weird fixation was absorbing the sins of the non-Western world and correcting them via our own propaganda. United Nations Under-Secretary-General Phumzile Mlambo-Ngcuka gave a talk in which she mentioned United Nations Women’s Goodwill Ambassador Emma Watson. The Harry Potter cutie is part of a new commitment called HeForShe where men sign in and commit to fight sexism. (I tried it. Nothing happened.)