What’s the Next Fake News? 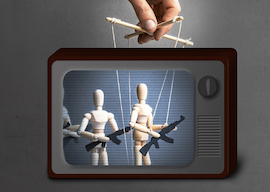 NEW YORK—On April 21, 1980, Rosie Ruiz won the fabled Boston Marathon in record time and looked fresh as a daisy when the media descended on her following her crowning with a wreath à la Ancient Greece. Rosie answered all the questions. She loved running, this was only her second marathon, and no, she was never tired or doubtful of victory during the two hours and 32 minutes of the race. The newspapers and the hacks went wild.

Well, the reason for Rosie’s freshness, it later transpired, was that she had entered the race twenty minutes from the finish, having used regular transport to get there from the start. She had missed all the checkpoints, but in view of the fact that she was a Cuban-American and a woman to boot, the race marshals blamed themselves for missing her. For some strange reason we have never heard of Rosie since then, but now, age 66, I hear she’s doing fine. Oh yes, I almost forgot. Rosie had to return the medal and the cash to the rightful winner, a Canadian lady who throughout two hours and thirty-some-odd minutes thought herself leading, only to be told she was second after a record-breaking run.

Rosie has never complained about having to give back the medal, but in a somewhat similar situation, two women, a gray old hag and a gossipy middle-aged one without hair, both of whom were caught cheating, have refused to return their prizes. I am, of course, speaking of The New York Times and The Washington Post, both Pulitzer Prize winners for exposing Donald Trump’s collusion with Russia, something they decided to invent the moment The Donald was elected. And it was as easy as pie. Unlike Rosie, who at least ran for twenty minutes and worked up a sweat, these two old tarts didn’t even bother to go through the motions of investigating.

“Just imagine what an intelligent writer could do with Trump’s presidency.”

The very few unbiased Washington correspondents have thoroughly covered this farce of false Russian collusion charges, but here’s a different view, what might have been, if the two old hags had acted like proper news gatherers instead of paid agents of the left. They (the old hags) could have gone Greek, i.e., taken the high road. But that would have required talent as well as knowledge. Instead, a lachrymose and hysterical Roger Cohen sort of compared Trump to Hitler—a tired cliché, especially when one killed millions of Jews while the other moved his embassy to Jerusalem and recognized Israel’s illegal annexation of the Golan Heights. Try reading a bit of history, Cohen, and have a colonoscopy to clear up your brain.

Just imagine what an intelligent writer could do with Trump’s presidency. They could go Euripidean, with American details strictly observed. A mythological Greek tragedy full of glory and pathos, ending in victory and tragedy—a talented person could do wonders with it. Trump, after all, is a glorious tragedy as well as a comedy. But both papers, as well as CNN and the networks, are under the influence of the pimps of death, as I call the neocons, those dark forces behind the Iraq and Afghanistan tragedies. William Kristol, a Never Trumper and pimp of death par excellence, has grown increasingly cartoonish by being always wrong, yet his career keeps advancing. As the saying goes, there’s a sucker born every minute.

Yes, Trump, triumph, and tragedy—it would make great reading, but fake news has prevailed. What is annoying is the refusal of the newspapers and hacks involved in a two-year masquerade to not only apologize but also return the prizes they voted to give themselves. American hacks really think they’re superior, but they judge by comparing themselves to those they never stop defending: the dregs of society. More socialism and more open borders are what the Democratic Party wants, and what the media parrots.

And it gets worse. It now transpires that the cheating and collusion was done by the FBI, working in cahoots with Hillary’s campaign, and The New York Times and The Washington Post knew it but chose instead to write the very opposite, that it was the Russkies and Trump. Mueller even told them so during the investigation, but they chose the big lie instead. This should have been a death blow for the reputation of any newspaper, but if one watches zombie and sci-fi programs on television all day and night, as Americans tend to do, how on earth can they recognize fake news when they see it?

Everything Trump said or did these past two years sparked an avalanche of thunderous denunciations from both reporters and editorial writers. Reporters wrote editorials and writers simply lied and presented theories as facts, and they continue to do so. Now that Russia has fallen through, the media will expose Trump as a KKK member and a rabid racist. (Cohen will stick to the Hitler comparison.) It will be another massive disinformation campaign, and who knows, this time, without a Mueller, the charges might stick. (Trumps eats dead black babies for dinner instead of hamburgers while watching Fox News, read all about it.)

Night after night for two long years the public had to listen while pundits explained how a Russian op was directing everything and anything The Donald did. Are they now eating humble pie? Not in the least. The plot to kill brown and black people and keep all of them out of the mainland will be the next fake news. And you read it here first.