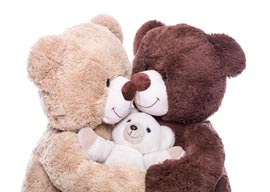 The first thing I thought when I heard the names of Syed Rizwan Farook and his wife, Tashfeen Malik, was “They sound like new parents.” Sure enough, the couple had a baby six months ago and had the tenacity to drop it off at Grandma’s before the shooting. America is the only country in the developed world with zero days” paternity leave. In Iceland, fathers get 120 days off with 80% of their original wages. They don”t have shootings in Iceland. The police shot a man dead for the first time there two years ago and apologized immediately. Police here rarely apologize when they kill someone and they”re usually killing someone who is stressed out. Raising a 6-month-old is a living hell that wears on your psyche every waking moment (which is a good 20 hours a day). Men go nuts from lack of sleep and women often get postpartum depression. Syed and Tashfeen likely had a deadly combo of both. Instead of trying to relieve that stress, the government is busy letting the carnage explode around us.

Obama has created millions of jobs and has tried to make employees feel comfortable, but big business doesn”t like helping anyone but themselves. They only pay about $10 billion a year promoting multiculturalism and it’s not even close to enough. Minorities in the workplace are almost as stressed out as new parents. Who could forget Jah”Keem Yisrael, the mild-mannered employee of Vaughan Foods in Oklahoma who was fired so severely, he was forced to sever a co-worker’s head in retaliation? How bad do things have to get before we wake up and commit to allocating more tax dollars to making workplace violence a thing of the past? This attack came only a few years after Nidal Hasan became so disenfranchised at work that he was forced to workplace-violence 13 fellow soldiers to death.

“Politicians nailed this long before we did and the only way we could have prevented this shooting and others like it would be to give them more authority.”

You can”t keep disenfranchising people and expect it to have no effect. Every microaggression or cold stare you give an outsider builds up like a pressure cooker and eventually has to go off. The Tsarnaev brothers were so disenfranchised that Tamerlan claimed, “I don”t have one American friend.” What were they supposed to do, not blow Americans up? Last year, Canada had two disenfranchised attacks in one week and one of the shooters, Michael Zehaf-Bibeau, was the son of the deputy chairwoman of the immigration division of the Immigration and Refugee Board of Canada. That’s how bad things are. The top refugee official of the entire country doesn”t have enough power to help her own son. Can we not just put our arms around each other and be friends? Can we not just hold up a flag that says “Welcome“? May God have mercy on us if we don”t.

When I was in Paris after the recent massacre there, locals told me that they hate America and that the Jews are to blame for the shootings. They were angry about globalization and said seeing cheeseburgers for sale was a sign they were losing French culture. American foreign policy and our love of Israel had created so much tension around the world, it was literally causing gun explosions all over Paris. One thing few Parisians I spoke to seemed to want to blame was the most obvious culprit in this equation: guns. Though they have fairly good gun laws in Paris, it’s still too easy to be armed there and the solution is obviously more government regulation.

You”d have to be a fool not to notice that we need the same here in America. Rep. Jan Schakowsky (D-Ill.) is no fool, and like many Democratic senators, she explained to the rest of us that the shootings in Paris are a “chilling reminder“ of the need for gun control. Sen. Dianne Feinstein (D-Calif.) agreed, adding, “They don”t have to bring it with them, they can buy it once they get here.”

They warned us, but we refused to listen and then BOOM a couple weeks after Paris these stressed-out, disenfranchised, overworked new parents have legal guns waved in their faces and eventually use them on 14 people in San Bernardino. How many innocent people have to die before we wake up and get tougher on gun control?